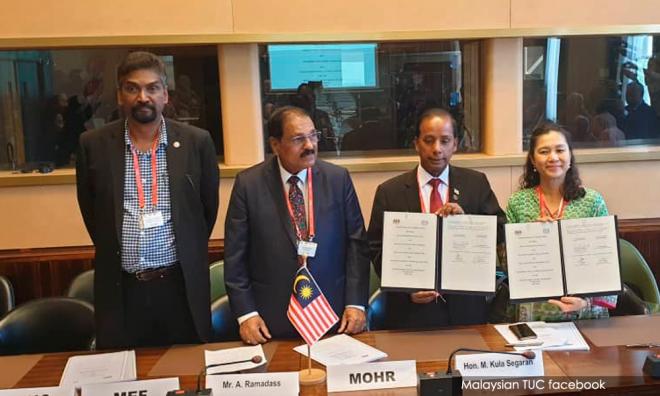 Yoursay: Kula’s stand on convention against sexual harassment a disappointment

JW: Human Resources Minister M Kulasegaran, me thinks you protest too much.

Your many attempts to justify your abstention (in the International Labour Organization’s Convention on Sexual Harassment and Violence), even to the extent of citing to us how Singapore voted (hey, we don't care because we are Malaysians), show you knew you were wrong with your vote.

Don't shift the blame to others, knowing you would be hammered for your vote. Own up to it. We are not as dumb as you thought we were.

As for the Malaysian Employers Federation (MEF), I kind of expected them to vote the way they did.

They are usually backward in their thinking about this and when they eventually get around to it, they would shamelessly grab and monopolise the spotlight for doing the right thing.

And as for the Malaysian Trades Union Congress (MTUC), you are a major disappointment and worse than MEF.

Anonymous 2354931441238481: The government of a country makes its stand on the rights of all citizens, irrespective of their sexual orientation, and that they are protected under the laws of the country, including labour laws that protect every individual against sexual harassment but unfortunately, this is not the case for Malaysia.

It’s as if the LGBT (lesbian, gay, bisexual and transsexual) people don’t exist so there is no need for the law to protect them.

Why should we seek other countries’ advice? Aren’t we a sovereign country and make decisions that are good for the nation and will put us in good standing with the rest of the world?

Ranjit Singh Malhi: I have observed that over the last one year, several politicians have been transformed from hawks into sparrows or lions into lambs after tasting power in office. What a shame!

Shanmugam VK Subrayan: Obviously MTUC leader J Solomon lacks the courage and leadership qualities of men like V David, whose lives were dedicated to the welfare of the workers. Isn't Solomon ashamed of calling himself the workers' representative?

Kulasegaran, since when did the government become subservient to union and employer representatives? Stop comparing yourselves with Singapore whenever it is convenient to you.

Anonymous_3fe1: What is really sad is the Pakatan Harapan has displayed a total lack of confidence.

Why are they so scared of a minority extreme group? Why pamper these people when they will never vote for you anyway?

Now Harapan runs the real risk of losing their core support – those who voted them in, including nine out of 12 states. The majority of rational, moderate Malaysians are with you. Stop being a coward.

Malaysian-United: What a bunch of pretentious prudes! They make a big show of condemning LGBTs, but secretly indulge in such "forbidden" acts/behaviour.

The recent sex video scandal is only the tip of the huge LGBT iceberg. Some people view this issue as a private matter and not something the government should interfere with. In any case, there isn't much the government can do, is there?

Let's just face it - you can mete out punishments for such "offenders", but you can't change people's attitude towards something so personal.

This is something the individual must decide for himself/herself. It's a moral/religious thing, not a crime. The bottom line is, there are LGBTs in this country and all lives are precious and need to be protected.

What's the point of "rejecting" LGBT when there is nothing anyone can do about it? Can you "cure" this phenomenon like it were some kind of disease?

If it can be "cured", then perhaps there is a reason for rejecting LGBT and the government can get down to treating the people with LGBT tendencies.

Otherwise, the government should just acknowledge that everyone has his/her own sexual preferences (whether we like it or not) and do away with the prejudices against LGBTs.

No one is asking anyone to endorse LGBT activities in the country, we are just asking you to treat everyone fairly.

Odysseus: MTUC and MEF, your role is to protect the right of workers and not play politics. Leave politics to politicians.

If you want to mix politics with your current role, please resign and be a full-time politician. Now workers cannot even trust you to look after their rights.

Newday: Being LGBT in Malaysia is not illegal. Sodomy is. Please get that right.

This decision by MTUC just estranges Malaysia further from the modern world when it comes to basic human rights. I never thought a trade union would lose its ‘caring for workers rights’ compass like this.

Guyintheglass: Because of the inclusion of LGBT, MTUC and MEF voted against the protection of workers against violence and harassment?

Bibut: These are examples of people who cannot separate their own beliefs and their profession.

Even if you don't recognise a certain group, or condone their behaviour, it doesn't mean you can't agree to protect their rights, especially when it involves everybody, not only them.

Anonymous_2679c6e5: The Malaysian representatives must remember that their Islamic views and values are not the only ones representing Malaysia.

If you can’t dissociate yourself and see the larger picture and other cultures and values, you do not have the right to speak for the rest of Malaysia.

I_M_Malaysian: LGBTs deserve protection. Are they saying that just because a person is an LGBT, he/she deserves to be beaten up or harassed?

When a person is drowning, will these fools ask his/her sexual orientation before saving him/her?

TehTarik: Thanks to MTUC for being the flag-bearer against loose morals.

We, as a nation, should be extremely proud that out of 467 members, only seven (including Malaysia) are holding true to the word of God.

yoursay
lgbt
sexual harassment
malaysian trades union congress
Related Reports
History shows gender, sexual diversity not alien to M'sia
a year ago
'One thing agreeing to a sexual harassment convention, another to ratify it'
a year ago
Yes, it was LGBT factor which made us say 'No', confirms MEF boss
a year ago
'I'm not an alien nor inviting people for sex' – LGBT activist rues postponed show
a year ago