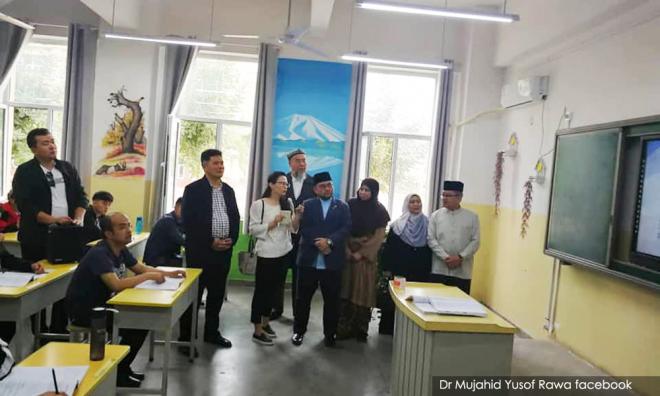 Minister in the Prime Minister Department Mujahid Yusof Rawa's office has defended the minister's conduct during his trip to China after being accused of pandering to Beijing's propaganda on its treatment of its Muslim population.

It said that a news portal's report highlighting the minister's description as "false news" about Xinjiang was "confusing, inaccurate and did not reflect the entire picture".

"In the minister's speech text, there was no mention of Xinjiang or Uighur.

"The words 'false news' was used to show that false news can impact the relations between a country and its people.

"For the record, the Muslim population in China is not limited to the ethnic Uighur but also other ethnic groups including the Hui, Kazakh, Uzbeks and Tajiks," it said in a statement today.

Mujahid, in a speech in Beijing on June 28, had said: "False news in China about Muslims being oppressed could trigger a wave of sympathy to the oppressed and affect relationships."

“(Likewise) ... false news about Hindu followers being treated unjustly by Muslims in Malaysia, for example, could trigger hatred towards the Muslim minority in India,” he added.

Mujahid also came under fire from Islamic Renaissance Front (IRF) for describing re-education camps housing tens of thousands of ethnic Uighurs in Xinjiang as "vocational and training institutions" on Facebook.

However, Mujahid's office stressed that he had complied with the Foreign Ministry's guidelines during his visit to China from June 23 to 30.

It said that during the visit, Mujahid had met with the United Front Work Department Vice- Minister Wang Zuoan, where he stressed freedom of religion and respecting the rights to practise one's religion.

"This is the first time a Malaysian minister spoke about religious issues to a China representative and the feedback was positive," it said.

It added that various other issues were also touched on, including on expanding Malaysia's halal industry and haj management for imams in China.

"For the record, China has around 20 million Muslims comprising various ethnics and has around 30,000 mosques and tens of thousands of imams.

"Therefore, in the minister's discussion with the vice-minister, the question of how Malaysia could help the imams in terms of education so that they can play their role in their community in China was raised," it said.

It added that Mujahid also delivered a speech entitled 'Towards a peaceful and harmonious world' at the Beijing Foreign Studies University.

"The minister took the opportunity to urge that any problems involving religion be resolved through cross-religious dialogue," it said.