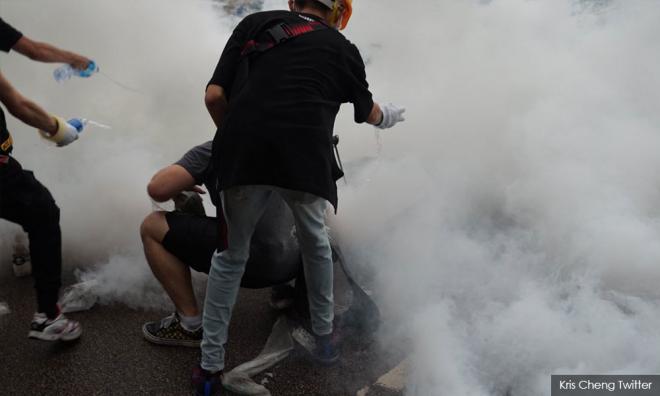 Hong Kong police fired tear gas early today to disperse hundreds of defiant protesters, some of whom had stormed and ransacked the city’s legislature hours earlier on the anniversary of the city’s 1997 return to Chinese rule.

Police arrived in a convoy of buses near midnight as about 1,000 protesters, furious at a proposed law that would allow extraditions to China, were gathered around the council building in the former British colony’s financial district in a challenge to the authorities in Beijing.

Earlier, protesters wearing hard hats, masks and black shirts had used a metal trolley, poles and scaffolding to charge again and again at the compound’s reinforced glass doors, which eventually gave in. Scores of them poured into the building.

Police fired several rounds of tear gas as protesters held up umbrellas to protect themselves, trying to block their advance. Plumes of smoke billowed across major thoroughfares and between skyscrapers.

The extraordinary violence marked an escalation in the weeks-long movement against the extradition law, which the city’s leader, Carrie Lam, had argued was necessary, but suspended in mid-June after protest marches that drew hundreds of thousands of people onto the streets.

Lam  called a news conference at 4am today to condemn what were some of the most violent protests to rock the city in decades. It was not clear if any arrests were made.

Umbrellas, metal barriers, hard hats, water bottles and other debris lay strewn across major roads near the legislative council, known as Legco. Police and work crews removed metal barriers and other blockades from some thoroughfares in a bid to clear them ahead of businesses reopening today.

Inside Legco, protesters smashed computers and spray-painted “anti-extradition” and slurs against the police and the government on chamber walls. Other graffiti called for Lam, Hong Kong’s chief executive, to step down, while pictures of some lawmakers were defaced.

“HK Is Not China” was painted in black on a white pillar.

The government called for an immediate end to the violence, saying it had stopped work on amendments to the suspended extradition bill, and that the legislation would automatically lapse in July next year.

“This kind of violent behaviour affects the core value of the rule of law, and I felt angry and upset about this, and need to seriously condemn it,” Lam later told the media.

“I believe the citizens feel the same.”

Yesterday, which was a public holiday, the protesters, some with cling film wrapped around their arms to protect them from pepper spray and tear gas, again paralysed parts of the Asian financial hub as they occupied roads near the government.

Lam has stopped short of protesters’ demands to scrap the extradition bill, although she has said the suspension would effectively kill the proposal because of the lawmaking schedule.

The Beijing-backed leader is now clinging to her job at a time of an unprecedented backlash against the government that poses the greatest popular challenge to Chinese leader Xi Jinping since he came to power in 2012.

News of the protests in Hong Kong has been censored in the mainland.

“The kind of deafness that I see in the government this time around despite these protests is worrying. The complete disregard for the will of the people is what alarms me,” said Steve, a British lawyer who has worked in Hong Kong for 30 years and declined to give his last name.

“If this bill is not completely scrapped, I will have no choice, but to leave my home, Hong Kong.”

Opponents of the extradition bill, which would allow people to be sent to mainland China for trial in courts controlled by the Communist Party, fear it is a threat to Hong Kong’s much-cherished rule of law.

The Legislative Council Secretariat released a statement cancelling business for today. The central government offices, which are adjacent to Legco, said they would close today “owing to security consideration”, while all guided tours to the Legislative Council complex were suspended until further notice.

Hong Kong returned to China under a “one country, two systems” formula that allows freedoms not enjoyed in mainland China, including freedom to protest and an independent judiciary.

Beijing denies interfering, but for many Hong Kong residents, the extradition bill is the latest step in a relentless march toward mainland control.

China has been angered by criticism from Western capitals, including Washington and London, about the legislation. Beijing said yesterday that Britain had no responsibility for Hong Kong any more and was opposed to its “gesticulating” about the territory.

The European Union yesterday called for restraint and dialogue to find a way forward.

A US State Department spokesperson urged all sides to refrain from violence.

“Hong Kong’s success is predicated on its rule of law and respect for fundamental freedoms, including freedoms of expression and peaceful assembly,” she said.

While thousands of demonstrators laid siege to the legislature, tens of thousands marched through the centre of town in an annual handover anniversary rally. Many clapped as protesters held up a poster of Lam inside a bamboo cage. Organisers said 550,000 turned out. Police said there were 190,000 at their peak.

More than a million people have taken to the streets at times over the past three weeks to vent their anger.

A tired-looking Lam appeared in public for the first time in nearly two weeks, before the storming of the legislature, flanked by her husband and former Hong Kong leader Tung Chee-hwa.

“The incident that happened in recent months has led to controversies and disputes between the public and the government,” she said. “This has made me realise that I, as a politician, have to remind myself all the time of the need to grasp public sentiment accurately.”

Pro-democracy lawmakers and the protest march organisers said Lam had ignored the demands of the people and pushed youngsters toward desperation, despite pledging to listen to people’s demands.

Beijing’s grip over Hong Kong has tightened markedly since Xi took power and after pro-democracy street protests in 2014 that failed to wrestle concessions from China.

Tensions spiralled on June 12 when police fired rubber bullets and tear gas at protesters near the heart of the city.

The uproar has reignited a protest movement that had lost steam after the failed 2014 demonstrations that led to the arrests of hundreds.

The extradition bill has also spooked some Hong Kong tycoons into starting to move their personal wealth offshore, according to financial advisers familiar with the details.