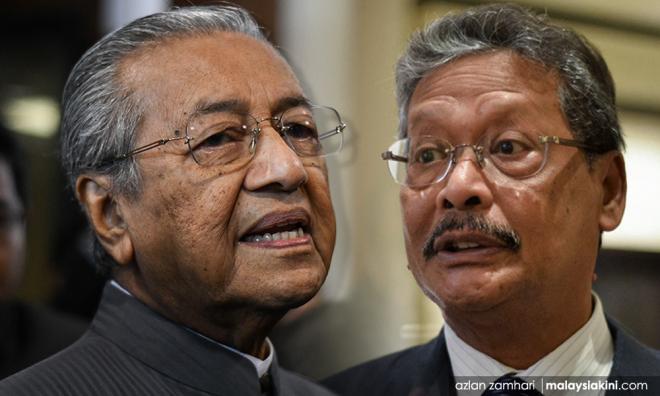 The former attorney-general (AG) Mohamed Apandi Ali (above, right) has recalled how the country’s legal team had been prepped and ready to argue the country’s case over Pulau Batu Puteh at the International Court of Justice (ICJ) when Malaysia inexplicably dropped its review bid.

Apandi stated Prime Minister Dr Mahathir Mohammad (above, left) made the unilateral decision to withdraw the country’s bid to overturn the ICJ’s 2008 ruling awarding legal jurisdiction of Pulau Batu Puteh (Pedra Branca) to Singapore without consulting him or the Cabinet last year.

He said this resulted in Malaysia losing its sovereignty over the land “forever”.

“The case at the ICJ was set for the hearing of arguments on June 11, 2018. As AG, I was directed to go on leave. While I was on leave, Mahathir decided to withdraw the case without referring to me or the Cabinet.

“At the time, a team of lawyers, including several from the Queen’s Counsel, had prepared to argue the case at The Hague,” he said on social media.

“With the withdrawal of the case, we (Malaysia) lost our sovereignty over Pulau Batu Putih (Puteh) forever. How sad. What can we do, that is the decision of those in power,” he said.

Apandi said this when commenting on a Facebook posting by former premier Najib Abdul Razak yesterday.

In his posting, Najib outlined the “inconsistent” sequence of events leading to Malaysia’s withdrawal and Putrajaya's sudden announcement that it was taking up the case once more.

“Completely inconsistent. The rakyat and other countries are confused. Please make up your mind,” Najib said.

He said the government would be filing a judicial review over the status of Pulau Batu Puteh (pictured below), Batuan Tengah (Middle Rocks) and Tubir Selatan (South Ledge) at the ICJ.

This despite Mahathir reportedly stating at the 33rd Asia-Pacific Roundtable in Kuala Lumpur just last week that Malaysia accepted the ICJ's 2008 ruling despite still feeling strongly about the country's rights over the disputed island.

"When there is a dispute, we go to the table to discuss and negotiate. If we fail, we resort to arbitration or go to the International Court of Justice. We abide by the decisions.

“Malaysia won in our overlapping claims of territory with Indonesia, but lost in another with Singapore. All parties accepted the decision though we still feel strongly about our rights to the disputed territory that we lost," he was quoted saying.

In 2003, Malaysia and neighbouring Singapore took their dispute over Pulau Batu Puteh and two nearby maritime features, Middle Rocks and South Ledge, to the ICJ.

In 2008, the court, however, ruled that Singapore had sovereignty over Pulau Batu Puteh and that Malaysia owned Batuan Tengah.

It did not award Tubir Selatan to either country, stating merely that it belonged to the government in whose territorial waters it is located.

In February of 2017, Apandi, under the Najib-led BN government, filed a fresh application to review the Batu Puteh ruling after the discovery of “new facts”.

Yet, about a month after taking over as government, it was announced that the Harapan administration had dropped its case, but the ICJ did not mention when it received Malaysia’s withdrawal.

Apandi was forced to go on leave on May 14 last year, and the new attorney-general, Tommy Thomas, was only appointed on June 4 that year.

pulau batu puteh
apandi ali
mahathir
icj
najib
Related Reports
Putrajaya not giving up on Pulau Batu Puteh, to file review
a year ago
The importance of being 'chill' in the row with Singapore
2 years ago
'Absolutely untrue' - AGC counters Apandi on why M'sia lost Batu Puteh
2 years ago
Analysts: Pulau Batu Puteh withdrawal pragmatic, not likely a quid pro quo
2 years ago