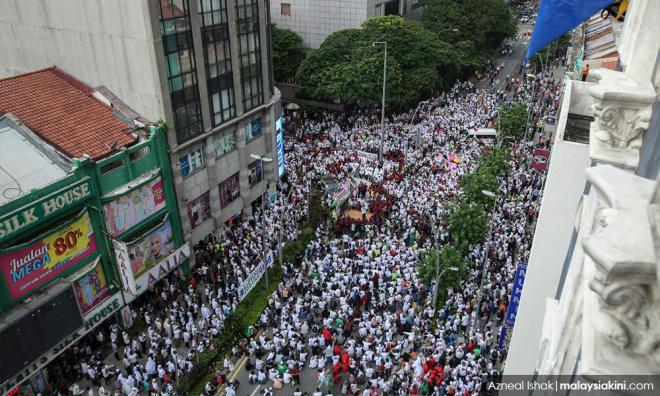 Further recommendations for amendments to the PAA

COMMENT | The Human Rights Commission of Malaysia (Suhakam) welcomes the government’s decision to amend the Peaceful Assembly Act 2012 (PAA) given that certain provisions in the law appear to limit the right to assemble peacefully publicly or privately to collectively express, promote, pursue and defend common interests which is a fundamental human right.

Suhakam welcomes the deletion of “street protest” in Sections 3, 4 and 21 of the PAA as the right to peaceful assembly is not limited to stationary protests, but also includes processions, marches and other forms of peaceful demonstrations.

In Moldova and Poland, small assemblies do not require any notification whatsoever as such notifications may nullify the possibility of holding spontaneous and urgent assemblies, which can be at odds with the right to freedom of assembly as guaranteed in Article 10 (1)(a) of the Federal Constitution of Malaysia.

Furthermore, in a landmark trial in 2014, Nik Nazmi vs Public Prosecutor declared Section 9 (5) of the PAA, a provision that penalises organisers of peaceful assemblies with a fine of up to RM10,000 if they fail to provide the requisite 10 days’ notice, as unconstitutional.

Internationally, the UN Special Rapporteur on the rights to peaceful assembly and of association finds that states should not impose authorisation requirements on organisers as such requirements turn the right into a privilege. This shifts the burden to challenge a refusal on the organisers rather than state authorities, who are the ones who must justify restrictions in the exercise of the right.

Suhakam, however, accepts in principle that this notification requirement is to enable the authorities to meet their duty to facilitate the assembly, to protect public safety, prevent any possible disorder or crime and to reroute traffic if necessary. The UN Human Rights Committee held that “a requirement to notify the police of an intended demonstration in a public place six hours before its commencement may be compatible with the permitted limitations laid down in Article 21 of the International Covenant on Civil and Political Rights (ICCPR).”

Suhakam, therefore, recommends a further review of this notification period to reflect a more responsive approach to human rights within the ambit of the law. To reflect the amendment to Section 9, Suhakam notes that Sections 12 and 16 of the PAA are accordingly amended that shall shorten the time frame to object or appeal to the minister from 48 hours to 24 hours following notification of an assembly.

Suhakam also notes the introduction of a new Section 21A whereby the police having consent from the public prosecutor may opt to compound up to RM5,000 in lieu of prosecution any offence punishable under Sections 9 and 15. Suhakam reiterates its position against the punitive element of these provisions as criminal sanctions should not, as a matter of principle, be used in response to a peaceful assembly.

Nevertheless, in view of the existing law, Suhakam further recommends the implementation of safeguards against delays and abuse of process that may cause prolonged and arbitrary detention of persons and their property. To this end, written offers to compound offences should be in a standard form, and release of arrested persons who have paid the compound must be immediate. The release of any goods or documents seized in connection with the same arrest must be unconditional. These safeguards should be reflected in an additional Schedule or Regulations pursuant to the PAA.

The deplorable practice of chain remand must also be avoided, with a view to eradicating the practice entirely and immediately. In any exercise of police and prosecutorial powers under this new section, Suhakam urges the authorities to ensure that the fundamental liberties and rights of the arrested person and his property, as protected under the Federal Constitution, including his right to legal representation, must always be respected.

Having been part of the Consultation Special Committee in 2018 which reviewed the PAA, Suhakam would also like to highlight that under the existing provisions of the PAA, children under the age of 15 are prohibited from participating in peaceful assemblies and under the age of 21, from organising them. This is at odds with Article 15 of the Convention on the Rights of the Child (CRC), of which Malaysia is a signatory, whereby children have the right to freedom of assembly, expression and association.

Children, regardless of age, must be allowed to freely express themselves, regardless of medium, and should not be prohibited from organising or participating in protests or demonstrations, especially if such assemblies directly affect them. Suhakam urges that the government take this into consideration and further amend the PAA so that children are able to fully participate in public assemblies. The right to assemble peacefully without arms should be extended to non-citizens as they too have the right to express themselves and to be heard.

Suhakam further recommends that the media are ensured full, and not just reasonable, access in public assemblies under Section 24, and for the inclusion of a provision to allow external parties, such as this Commission, the Bar Council and other relevant statutory bodies to monitor public assemblies.

The above is issued by the Human Rights Commission of Malaysia.