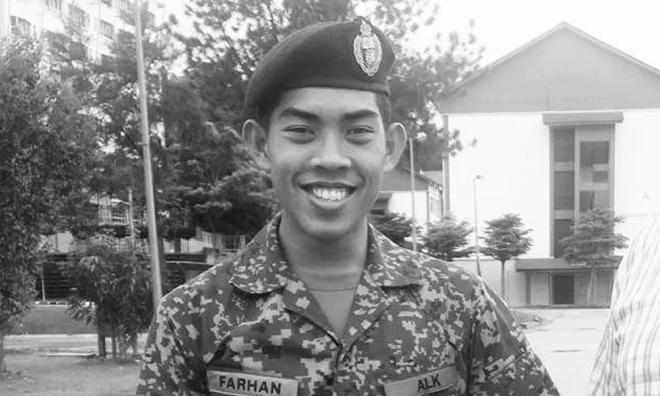 The High Court in Kuala Lumpur today set July 31 to decide on the fate of 19 National Defence University of Malaysia (UPNM) students who were charged with murdering and injuring their varsity mate, cadet officer Zulfarhan Osman Zulkarnain (above).

Judge Azman Abdullah fixed the date after hearing submissions from both parties.

DPP Julia Ibrahim, when met by reporters after the proceeding, said the prosecution’s submission focused on the 90 burn marks from a steam iron on the victim’s body.

"The report given by a pathologist from Universiti Kebangsaan Malaysia Hospital (HUKM), Dr Salmah Arshad, showed that the marks (from the steam iron) caused the victim to suffer 80 percent burns.

"The defence submitted the injury marks were not seen at the time of the incident, but based on the testimony of the witnesses, the victim screamed every time he was hit and the hot iron was placed on him,” she added.

Six UPNM students, Muhammad Akmal Zuhairi, Muhammad Azamuddin, Muhammad Najib, Muhammad Afif Najmudin Azahat, Mohamad Shobirin Sabri and Abdoul Hakeem Mohd Ali pleaded not guilty to charges of murdering and abetting the murder of Zulfarhan in room 04-10, of the Jebat hostel building in UPNM, between 4.45am and 5.45am on May 22, 2017.

The charges against the accused, all aged 23, were made under Section 302 and 109 of the Penal Code, which carry the mandatory death sentence upon conviction.

They were also charged with 13 other students with voluntarily causing hurt against the victim for the purpose of forcing the latter to admit to the alleged theft of a laptop, according to Section 330 of the Penal Code, read together with Section 34 of the same act, which imposes a maximum imprisonment of seven years, and a fine, upon conviction.

Zulfarhan died at the Serdang Hospital on June 1, 2017, believed to have been abused after being accused of stealing his friend's laptop.

The victim was reported to have suffered burns on the chest, arms and legs, and believed to have been tortured with a steam iron.