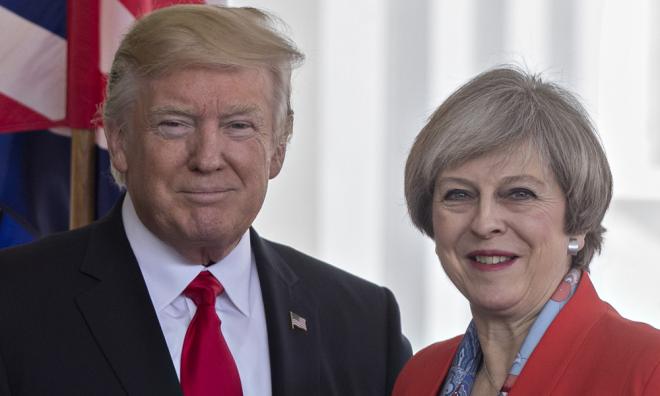 Trump assails Britain's May and her envoy to Washington

US President Donald Trump attacked Prime Minister Theresa May and her ambassador to Washington yesterday, while Britain voiced regret for the leak of confidential memos in which the diplomat called Trump’s administration “dysfunctional” and “inept”.

The memos from Kim Darroch, ambassador to Washington, were divulged to a Sunday newspaper, annoying Trump and embarrassing London.

“Contact has been made with the Trump administration, setting out our view that we believe the leak is unacceptable,” May’s spokesman told reporters. “It is, of course, a matter of regret that this has happened.”

Trump tweeted: “What a mess she and her representatives have created. I do not know the Ambassador, but he is not liked or well thought of within the US. We will no longer deal with him.

“The good news for the wonderful United Kingdom is that they will soon have a new Prime Minister. While I thoroughly enjoyed the magnificent State Visit last month, it was the Queen who I was most impressed with!"

It was the US president’s second broadside against the British ambassador, whom he criticised on Sunday as not having “served the UK well”.

Hours after Trump’s tweet, May’s spokesperson reiterated Britain’s position that the leak was unfortunate and said Darroch “continues to have the prime minister’s full support”.

UK Trade Minister Liam Fox, who is visiting Washington, told BBC radio he would apologise to Trump’s daughter Ivanka, whom he was due to meet.

“I will be apologising for the fact that either our civil service or elements of our political class have not lived up to the expectations that either we have or the United States has about their behaviour, which in this particular case has lapsed in a most extraordinary and unacceptable way,” Fox said.

“Malicious leaks of this nature... can lead to a damage to that relationship, which can therefore affect our wider security interest.”

Britain is hoping to strike a major trade deal with its closest ally after it leaves the European Union, an exit scheduled for Oct. 31.

In confidential memos to his government dating from 2017 to the present, Darroch said reports of in-fighting in the White House were “mostly true” and last month described confusion within the administration over Trump’s decision to call off a military strike on Iran.

UK ministers said the government did not agree with Darroch.

Hunt promised “serious consequences” for whoever had leaked the memos.

Nigel Farage, leader of the Brexit Party and long a thorn in the side of British governments, said figures such as Darroch would be “not be around” if ex-foreign minister Boris Johnson, the other candidate seeking to replace May, was chosen by Conservative Party members.

Despite being close to Trump, Farage ruled himself out of becoming Britain’s next ambassador in Washington, telling BBC radio: “I don’t think I’m the right man for that job.”

An inquiry was underway to determine who was behind the second serious disclosure of confidential material this year. May’s spokesman said police would be involved if there was evidence of criminality.

Two months ago, May fired defence minister Gavin Williamson after secret discussions in the National Security Council about Chinese telecoms firm Huawei were leaked to the media, and an inquiry concluded that he was responsible.

Williamson denied any involvement and police said there was no reason for a criminal investigation.