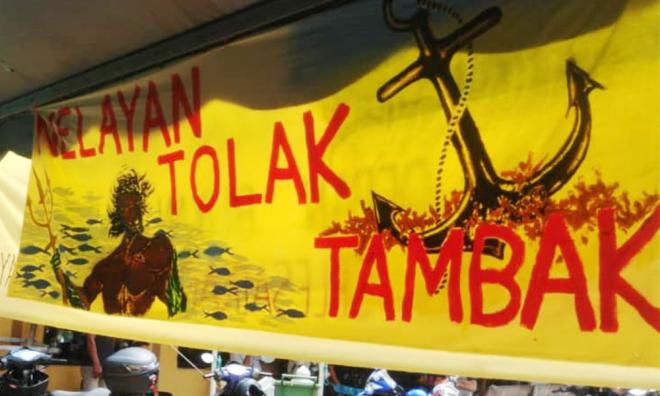 Fried kuey teow without cockles is just one of the many complaints in an informal dialogue session between PKR president Anwar Ibrahim and Penangites, especially the fishermen community, regarding the reclamation project in the state.

After Anwar gave a speech about opening up space for the fishermen and the state government to further discuss the issues surrounding the Penang South Reclamation (PSR) project, the audience began to voice their complaints and questions incessantly.

One man said the project would affect the supply of fresh seafood in Penang, giving an example of the famous Penang fried kuey teow without cockles.

Many fishermen also claimed the Penang state government avoided meeting with them for the past four years over this issue.

One man also urged the state government to reveal the 72 conditions listed in the Environmental Impact Assessment report for the PSR project for the sake of transparency, to which Anwar agreed.

Previously, Penang Chief Minister Chow Kon Yeow had said he will reveal the conditions in due time.

A man from Perak was also present, and he said the sand mining activities off the Perak coast for the PSR will affect his fishing livelihood.

Faced with a barrage of complaints and questions from the audience, Anwar attempted to placate the fisherfolk by insisting the PKR president is not there to reject or accept any proposals, but merely to be the mediator between the government and the fishing community.

On Thursday, about 200 fisherfolk from various associations in Penang and Perak staged a protest against the PSR project and the sand mining project in Perak in front of parliament. They also submitted a memorandum to Agriculture and Agro-based Industry Minister Salahuddin Ayub.

Earlier in his speech, Anwar said he told Prime Minister Dr Mahathir Mohamad and Chow that he intended to meet the fisherfolk to mediate the issue.

After reading through the fisherfolk’s memorandum and the government’s report, as well as other materials on the PSR project, Anwar said both parties should calmly meet and discuss this matter.

While he advised the fisherfolk not to stubbornly insist on the project’s cancellation before the discussion, Anwar (photo, above) also said he would not tolerate vague answers from the government on how they plan to ensure the sustainability of the fisherfolk’s livelihood.

“I will discuss with the chief minister. I will ask whether we can guarantee the future of the fisherfolk.

“If Chow is sympathetic to the idea, we have to give some space for discussion and he has to refer to the experts,” Anwar said in the dialogue held at Sungai Batu, Penang today.

At the same time, he doubted that the reclamation project would not negatively affect the fishermen.

“I do not know of a single area in the world with big reclamation projects where the fisherfolk’s welfare was preserved,” he lamented.

However, he said, perhaps there have been advances in technology or some new innovation that could change this.

He also stressed that it is important that the solution is sustainably beneficial to the fisherfolk, and not merely a compensation of “RM10,000 or RM20,000”.

“I would suggest to you not to accept such compensations,” Anwar said to the applause of the crowd.

While the state government may see certain projects as being beneficial, Anwar said they must remember not to abandon the plight of those living in rural areas.

“It must be a good offer, we cannot abandon the fishermen or the environment,” he said, stressing the importance of a balanced society.

The PSR project will see the development of three man-made islands with a total size of over 1,800ha, with parts of the island to be put up for sale.

The proceeds from this would be used to fund projects under the RM49 billion Penang Transport Master Plan (PTMP).

Previously, Chow reportedly said the state government would hold a meeting with the state’s fishermen association and they would discuss a compensation package for the fisherfolk.

Mahathir, meanwhile, had also said the government would look into the plight of the fisherfolk after they staged a protest outside parliament.