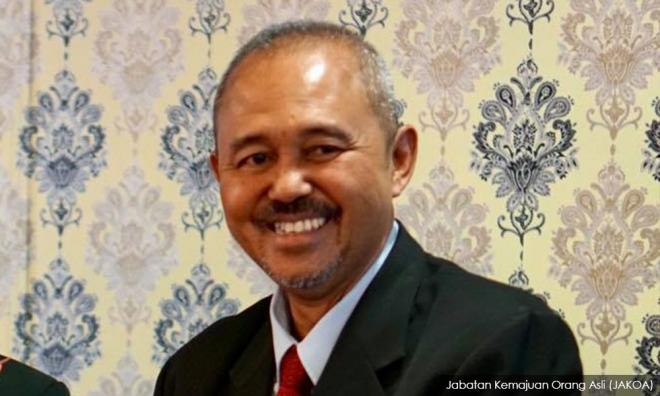 The Orang Asli Development Department (Jakoa) said they will take immediate steps to strengthen the batin institution as well as the Orang Asli Village Community Management Council in order to better monitor and detect marriages between foreigners and Orang Asli women.

This comes after an earlier report which alleged that foreigners were marrying Orang Asli women to exploit government assistance and benefits targeted at Orang Asli communities.

“Jakoa views such marriages done without informing us seriously.

“There will be long-term effects when the children of such marriages have problems registering in schools and receiving assistance from Jakoa,” said Jakoa director-general Juli Edo (photo, above) in a statement today.

The earlier report alleged that foreigners married to Orang Asli women would exploit their marital ties to apply for business licences using their wives’ names to farmland owned by the Orang Asli, but later abandon their wives and children after reaping the benefits.

The report also quoted an Orang Asli village head from Kampung Pos Terisu, Cameron Highlands, who said there were eight such couples in his village currently.

“Even if the man says he does not have a wife back home, we do not know the truth,” said 48-year-old Jaafar Timor.

However, Cameron Highlands MP Ramli Mohd Nor (photo, above) slammed Jakoa for alleged lack of action, claiming that it is a long-standing issue that many foreigners are farming on Orang Asli land.

“It is simple, how can farmers farm on Orang Asli land without Jakoa’s knowledge?

“How can foreign workers live and farm on Orang Asli land without Jakoa’s knowledge?” he said to Malaysiakini.

He added that he had asked about this matter in parliament before but the reply he received was “disappointing”.

They tried to push the matter to the state government, he said, but Jakoa is under the Prime Minister's Department so it should be a federal issue.

Jakoa, he said, actually has the power to kick out or bar anyone from entering Orang Asli lands if those persons have been found to be dangerous to the wellbeing of the indigenous people, as stated under Section 14 and 15 of the Orang Asli Act 1954.

“They know the law, but it is whether Jakoa and the Immigration Department wants to enforce the law or not,” Ramli said.

Ramli said even foreign workers with work permits are not allowed to marry locals, let alone those without permits.

He again questioned why Jakoa has not taken any action all this while.

orang asli
jakoa
juli edo
ramli mohd nor
cameron highlands
Related Reports
We need to talk about our Orang Asli community
a year ago
Waytha to pursue forced birth control probe, seeks meeting with Dzulkefly
a year ago
Over 700 Orang Asli students dropped out of school last year
a year ago
Orang Asli and freedom of religion
a year ago