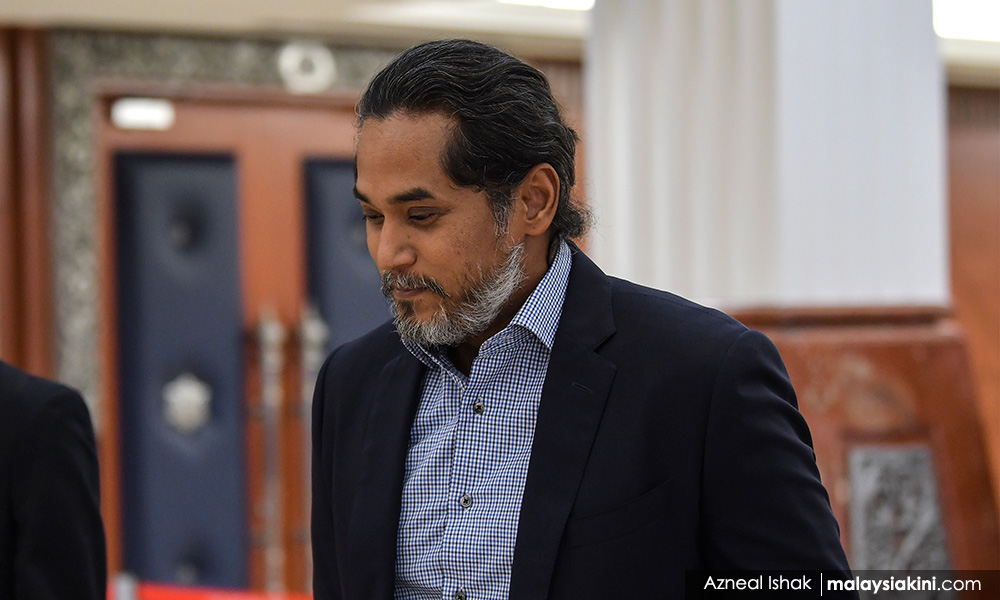 Yoursay: KJ is tainted by the company he keeps

YOURSAY | 'They try to drain the swamp, but snakes just continue to breed and multiply happily.'

Keropok Ikan: Former Umno Youth chief Khairy Jamaluddin is one of the best examples of how a very intelligent and capable politician with bright ideas, is just worn down by those around him and ends up being caught up in the mud, after having his spirit broken by the excesses of Umno.

Newday: KJ, if I were you, I wouldn't be happy either.

Your beloved party is now seriously delusional and has a very strange grasp of the current reality.

If the rest of them think Bossku and party president Ahmad Zahid Hamidi can raise the sunken ship Umno, you may as well be elsewhere.

Clever Voter: KJ's future hinges on which party he is aligned with, and it cannot be denied that minus those tainted warlords, he is the next best bet.

Leadership calls for him to be principled and going beyond sentiments. KJ must weigh his opportunities properly. Changing party is no guarantee.

Constitutional Supremacy: KJ should leave Umno and help build a new Malaysia, where economic performance and science and technology are important.

In Umno, there is no hope of a revival, especially when both Najib and Zahid are back in control.

Unspin: Love him or hate him, Khairy has what it takes to be our next PM.

He should have the guts to quit Umno and join Bersatu, because he has a great chance of succeeding either Dr Mahathir Mohamad or Anwar Ibrahim when the time comes.

Dudeno: Umno is incapable of reform.

They try to drain the swamp, but snakes just continue to breed and multiply happily. Either abandon your swamp or lie with the snakes.

MariKitaUbah: Appointing an ex-president who is facing 42 charges of corruption, money-laundering and abuse of power to be the adviser…

This is good for the rakyat to see that Umno hasn't learnt the lessons. BN lost because of him and now he is the adviser.

9th of May: What advice can a kleptocrat give, other than how to steal from the rakyat? Would you listen to advice from a thief?

Annonymous: Now you are kicking your down and out boss?

You were, and you are still, a member of the 60-years-old racist and corrupt regime, and complicit in the many crimes committed against the rakyat and country with your total silence, blind loyalty and support of a kleptocrat who plundered the nation's coffers and almost destroyed the country, if not for the rakyat's intervention on that historic and victorious day of Good over Evil on that great day of May 9, 2018.

The rakyat don't care a hoot whether you are happy or not.

Kural: KJ, you had so much leadership potential to do well in a political career.

But you diminished yourself in a comfort zone, despite the negative notoriety surrounding Najib. Yet you seemed (publicly) happy then. Unlike former deputy president Muhyiddin Yassin.

Anonymous_1e23ccf0: Please don’t make it out as if he is the last clean one standing.

He is fed from the same trough, the ‘dedak’ that came from the corrupt practices of his party.

Excuse me, Ku Li, are you kidding me?

Did you ponder the kind of damage and stealing from the coffers of Tabung Haji, Felda, the Pension Fund, etc, by ministers of the previous administration and Umno leaders? The corruption and destruction of key institutions and the civil service?

Umno certainly does not belong to the Malay community.

Yong Yeok Fong: Tengku Razaleigh said that they can get Najib's practical experience to be passed on to them in the light of the problems they are facing today.

But Najib must first get the old team back, people like Jho Low, Tim Leissner, Nik Faisal, Eric Tan, etc.

My2cen: Ku Li, you mean practical experience at stealing, robbing and looting to be passed to the committee?

Many years ago, I thought you were the PM we never had. Today I can confirm you are not and never meant to be a leader, least of all PM of Malaysia.

Thinking Aloud: In the past, many people thought highly of Tengku Razaleigh, but fortunately, he never made it to the PM’s post.

With the hindsight, we have a leader who hasn’t the guts to stand his ground or the principle to state a firm stand on his politics or political developments.

Always wishy-washy and trying to sit on the fence with an opportunistic attitude, it’s time to forget about him politically or take note of what he says.

It will not go down well with their grassroots with all these corrupt personalities helming Umno and fully supported by their lackeys MCA and MIC. They will drag PAS into the mud with them.

The Fog of Life: Why is it that some in the Malay community continue to support Umno?

Can they not read... think... reflect? Do they realise what kind of leaders they are supporting? Can one really be so stupid and ignorant?

yoursay
khairy jamaluddin
tengku razaleigh hamzah
umno
najib abdul razak
Related Reports
Nazri and KJ: Insane to expect better results with Najib at helm
a year ago
KJ to Najib: Don't use Umno as a 'shield'
a year ago
Khairy: Don't treat us as outcasts for speaking out
a year ago
KJ wants to be the one to move motion against Guan Eng
a year ago