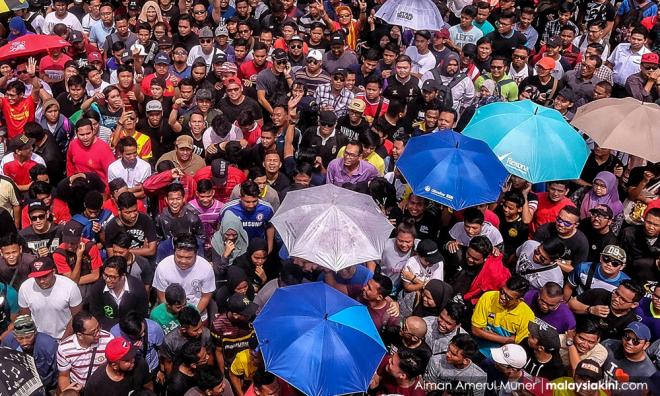 Undi18: Malaysia's historic constitutional amendment to give voice to youth

MP SPEAKS | Youth in Malaysia probably never had such press space like in the past two weeks and perhaps the full length of the coming week.

The first was an amendment to the Youth Societies and Youth Development Act, tabled a fortnight ago to redefine the age of youth as 15 to 30 years old. The previous definition extends up to 40-years-old.

Last week, Syed Saddiq tabled the historic Undi18 bill to amend the Federal Constitution to lower the voting age from 21 to 18 years old. The bill will also amend constitutional provisions to allow 18-year-olds to be admitted as a Member of the Lower House (Parliament) and Member of State Legislative Assembly, as well as to implement automatic voter registration.

If the bill is passed, then by 2023, when the next general election is due, there will be about 3.8 million youths between the ages of 18 to 20 eligible to vote.

In the midst of a highly partisan political climate, it is heartening to see both the government and opposition blocs unanimously supporting the #Undi18 amendments. It is a good sign when our Parliament sets aside politics for the interest of the country.

Yet, not everyone is convinced.

The most common concern is that young people, especially 18-year-olds, are not mature enough.

The fact is, in our country, under the Age of Majority Act 1971, 18-year-olds are considered "adults," assuming full legal capacity and are liable for their own actions.

In Malaysia, at 17, a person can get a driving licence, while an 18-year-old is allowed to get married, work and pay taxes, enter into contractual obligations, or even serve the country in high-risk jobs such as joining the police force, fire brigade and the army.

From this perspective, we can no longer disenfranchise 3.8 million adults from the formal democratic process of our country.

Of course, not all 18-year-olds are ready for marriage or to be a soldier, but let us be clear, maturity is not a factor of age.

I watched a comic once and he went: it wasn't kids who caused war and 9-11, genocide and the subprime crisis.

In fact, a young girl was once shot - not by 18-year-olds - because of her activism to promote education in her village. She was 15 when she was shot, and yet seven years later, today, Malala Yousafzai (above), now a Nobel Laureate, continues to be a harbinger of hope, only now, it is not just to her village in Pakistan, but also to the world.

In this case, who is the voice of reason and maturity: a 15-year-old youth or the “mature” adults, with their perverse logic, who sought to murder her?

In fact, when someone asked me if 18-year-olds are more easily influenced by fake news, and thus will make wrong decisions about important matters; my reply was to point them to recent research by Princeton University and New York University, which showed that older people are more vulnerable to fake news. In fact, those aged 65 and older shared seven times more fake news than those between 18 and 29 years old did.

Listen to the young

Nonetheless, behind this maturity argument, I believe lies a legitimate concern. For a long time, youth in Malaysia were alienated from the political process. In 1971, the then Barisan Nasional government introduced the Universities and University Colleges Act which, among others, banned students from taking part in politics.

Thus, some parties are worried about the immediate induction of young people who are inexperienced, and perhaps even unexposed to politics.

Perhaps there is also the long-standing and popular view that youths are not interested in politics.

As it is, youths are already involved actively in activities and movements which empower society and build the nation.

Last Aidilfitri, I attended a gathering hosted by a group of youths who called themselves “Buku Jalanan Chow Kit”. They had set up a library and learning centre in the middle of tumultuous Chow Kit, providing free tuition not only to local kids who live there, but also to refugees. They did all these without government assistance.

At this point, intervention is needed to provide opportunities for youth to learn about politics. Last year, Parliament amended the Universities and Universities Colleges Act 1971 to allow students to take part in politics.

The Ministry of Youth and Sports will be introducing Sekolah Rukun Negara to introduce our youth to the fundamentals of our country, the National Principles, the Federal Constitution, key institutions in the country, as well as our shared history and common values.

Yet, the most important thing is really not all these. It is a highly informed and educated generation. The last thing they need is more people telling them what to do, and feeding them with more information.

Youth are already “talking”, on social media, on Facebook, on Instagram and perhaps on the latest craze, Tik Tok. Yes, even Tik Tok - we see how 18-year-olds are mocked as the Tik Tok Generation - because society, the market, the government cannot afford to ignore the voice of millions of potential market disruptors and agents of social change.

They may not have our kind of experience. Yet, what is experience but familiarity with how things work within a system which we grew up in, and perhaps whose rules we even wrote along the way.

This sort of experience may not be relevant in the new world our youth are creating for themselves today. The VCR repairman’s experience will not make sense in a Netflix world!

Perhaps more than telling them what to do, it is time we allow the voices of youth to come mainstream: from Facebook to newspaper, from Instagram to radios, from Tik Tok to our TV channels.

Someone said, we are risking everything by leaving it to the kids.

My response is, the so-called adults have caused enough damage. Maybe with “kids” around, the “adults” will be better behaved.

STEVEN SIM is the Deputy Minister for Youth and Sports.