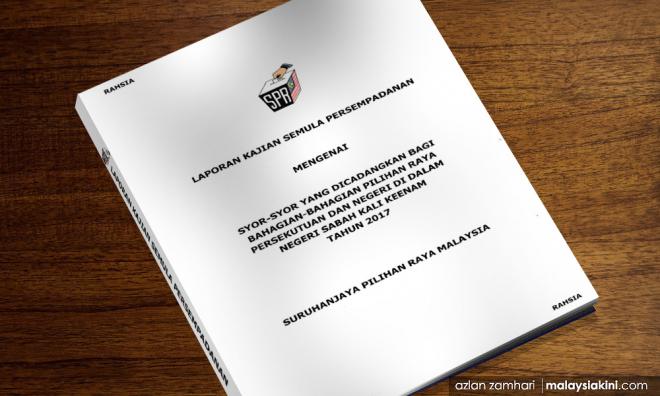 Disappointed that it was not made public, Bersih today decided to break embargo and reveal the 2017 Sabah delineation review report ahead of its tabling in Parliament tomorrow.

The electoral reform group stressed that the public should have been informed of the contents of the delineation review report before MPs vote on it.

"Bersih expresses deep disappointment that its call on July 9 for the embargo to be lifted was ignored and that the public is kept in the dark on this important decision as no media could report on the report," it said in a statement.

As such, Bersih said, it was left with no choice but to violate the Houses of Parliament (Privileges and Powers) Act 1952 and reveal the full contents of the report.

For breaking the embargo, the group said that it would pay the RM1,000 fine to the Dewan Rakyat speaker's office.

Terming the redelineation "malicious, flawed and obsolete," Bersih highlighted that the largest parliamentary constituency, Sepanggar, has 55,294 voters – twice the number of voters in Beluran.

It also pointed out that the largest state constituency, Sri Tanjong, has 25,104 voters, four times the number of voters in Banggi.

In its statement, Bersih emphasised that the "excessive malapportionment" will only be exacerbated with the lowering of the voting age to 18 and automatic voter registration.

It said the "300,000 to 400,000 new voters" added to Sabah's existing 1.12 million voters would likely result in a disproportionate number of electors in urban areas.

Bersih therefore urged MPs to cancel the debate and vote against the proposal.

On July 11, Sabah Chief Minister Mohd Shafie Apdal said that he was confident that the bill to increase the number of state seats from 60 to 73 will be approved when it is tabled in Parliament.

Drop the obsolete delimitation proposal for Sabah
9 Jul 2019
Lowering the voting age - the right risk for Harapan
4 Jul 2019
Parliament reconvenes: Is the reform agenda still on?
29 Jun 2019
Electoral reform: What needs to be done, and how
31 Aug 2018