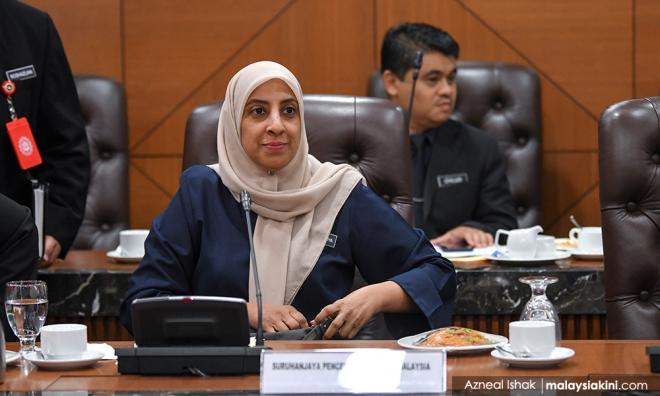 Audit Department to brief MACC before decision on investigations - Latheefa

The Malaysian Anti-Corruption Commission (MACC) will meet with the National Audit Department before deciding whether an investigation should be conducted on the weaknesses disclosed in the Auditor-General's Report.

MACC Chief Commissioner Latheefa Koya said that her office was waiting for the date to get a briefing on the matter before taking the next step.

“I have not received the date yet… we are waiting for the briefing from the Audit Department.

“They will brief us on the report, and from there we will focus on the case. Where there are clear-cut problems, we will set up an investigation,” she said in an interview with Bernama.

The Auditor-General's Report 2018 Series 1 revealed several issues, including elements of manipulation and fraud in the Malaysian Immigration System (MyIMMs) for foreign labour quota approval, which resulted in revenue loss for the country.

She explained that complaints on corruption cases could be made in various forms such as via mail, MACCMobile application, SMS, email and directly to the MACC.

“We also received more than 10 letters, including poison-pen letters, with information on corruption with a basis for an investigation,” she said when asked about letters on corrupt practices received by the MACC.

She said not all letters received were poison-pen letters as there were also letters that had information on the sender.

In this regard, Latheefa advised members of the public who wished to lodge complaints or channel information on corrupt practices to include the contact information of the complainant to enable them to obtain additional information if necessary.

“Some only provided basic information, thus making it difficult for us to take further action if we do not have the complete information of the complainant.

“As for the complainant, they must not say that the MACC does not take action. Give us your name, phone number, and email address so that we can get back to you and can contact you (for further information),” she said.