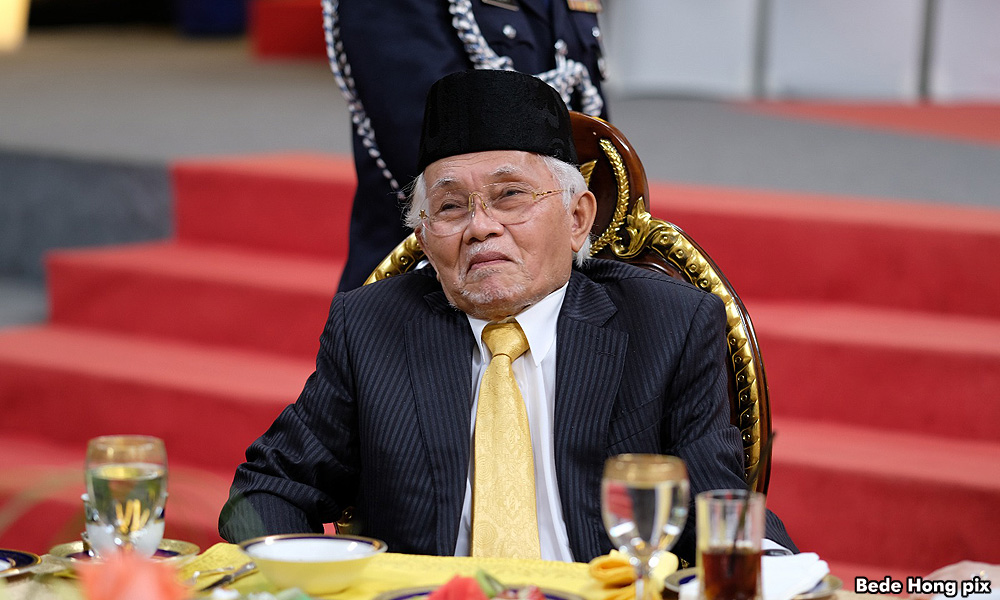 Taib is the ultimate test of MACC's credibility

COMMENT | The Pakatan Harapan government’s anti-corruption credibility leverages on its pursuance of other big corrupt public officials, besides Najib former premier Abdul Razak, especially since the new MACC chief has just announced that she will not let off any “big fish” in her probes.

Is there a bigger fish in Malaysia than the former Sarawak chief minister Abdul Taib Mahmud?

Thus, Malaysians will not let off such trifling excuses made by de facto law minister Liew Vui Keong that “…there is no new lead for the MACC to reopen its graft probe" against Taib.

Clare Rewcastle-Brown – the journalist feted by Prime Minister Dr Mahathir Mohamad for helping to bring down his bête noire Najib – has said that the new government has a moral obligation to investigate corruption allegations against Taib as quickly and efficiently as possible.

Put simply, the prime minister cannot justify his full-blown enquiry into 1MDB and pursue Najib in the relentless manner that he has, and yet ignore the tens of billions pillaged from Sarawak and the vast wealth owned by Taib's family, with properties in Canada, US, UK and elsewhere.

From the ferocity of the new government’s actions against Najib, it must be assumed that their top priority is fighting corruption and promoting good public governance.

Hence, making it mandatory for all public officials to declare all their assets, including those of their spouses and children, is crucial to the campaign to prevent corruption in politics.

An obvious target for assets declaration would surely be Taib, who has been touted as the richest individual in Malaysia.

Mahathir (photo) previously said that no action could be taken to investigate the Sarawak governor because no police report had been made against him.

Soon after, he was soundly contradicted by Baram PKR chairperson Roland Engan, who said that he had filed a formal complaint against Taib for alleged corruption and power abuse when he was still the chief minister.

He said the report was lodged at the Miri office of the MACC on June 6, a week after he lodged a similar report with the police on May 29.

Other state leaders have also said that they had made similar police reports against the former chief minister through the years.

What happened to the MACC probes?

In June 2011, the MACC said that it had initiated investigations into Taib’s alleged millions in Swiss banks after financial authorities in the country began looking into his tangled fortune.

The Swiss Anti-Corruption Agency had frozen Taib's assets over allegations of timber corruption.

Then-MACC commissioner Abu Kassim Mohamed said MACC was in the process of gathering more information regarding the matter. So far, we have heard nothing more of these investigations.

From their investigation, the MACC should at least let the Malaysian public know the extent of Taib (photo) and his family’s wealth.

Meanwhile, Rewcastle-Brown’s collaborators, Swiss NGO Bruno Manser Fund (BMF), said they are willing to share with Harapan the results of a seven-year evidence-gathering process on alleged corrupt practices by Taib.

This was in response to Mahathir’s call to show evidence on the Sarawak governor’s alleged corrupt practices.

BMF has estimated the combined net worth of 20 Taib family members at close to US$21 billion (RM86.4 billion), spread over 400 companies around the globe accumulated over three decades.

The family has controlled the granting of logging and plantation concessions, the export of timber, the maintenance of public roads as well as the production and sale of cement and other construction materials.

The Taib family’s flagship company, Cahya Mata Sarawak (CMS), has benefited from untendered public contracts, such as the RM10 billion Bakun dam (another megaproject under the Mahathir administration in the 1990s), the RM300 million state legislative assembly building in Kuching, the maintenance of 4,000km of roads in Sarawak, and a 15-year concession to maintain 643km of federal roads.

On April 20 last year, Taib and his family were accused in a lawsuit of funnelling proceeds of corruption to fund the expansion of the Ottawa-based real estate company Sakto Group’s US$259 million (RM1.06 billion) real estate empire.

Sakto is run by Sean Murray and his wife, Jamilah Taib (photo).

Founded in 1983, Sakto owns several office and residential towers in Canada’s capital, including offices in the Preston Square office complex as well as the 158-unit luxury condo building, The Adelaide.

Mahathir and the Harapan government have pledged to wipe out kleptocracy,  which was what gave them the victory in the 14th general election.

They must prove to the people that their hounding of Najib and the 1MDB scandal was not a personal vendetta and an election-winning strategy.

Nor must they disappoint the people of Malaysia – especially Sarawakians, who have seen the wealth of their state sucked dry by the rapacious greed of the kleptocrats there.

KUA KIA SOONG is the adviser of Suara Rakyat Malaysia.

comment
crime
corruption
sarawak
macc
abdul taib mahmud
Related Reports
Liew: No cause for MACC to reopen probe against Taib
a year ago
Why I’ve given up on Putrajaya dealing with Taib
a year ago
PSM: No-nonsense Latheefa's first task is to probe Taib
a year ago
If Taib is clean, then Najib must be a saint
a year ago