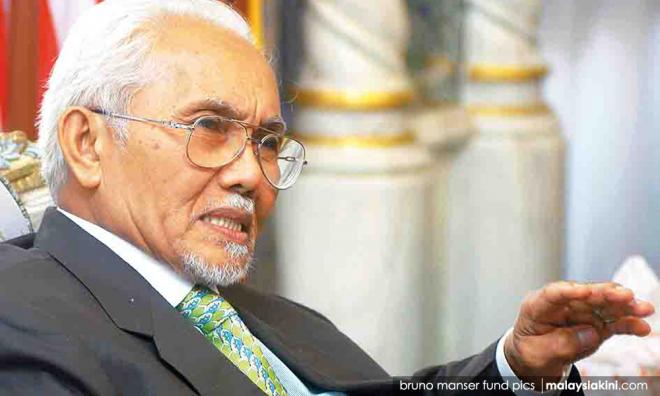 Yoursay: Re-examine old probes on Taib, instead of asking for new leads

YOURSAY | ‘Why do the gov’t and Mahathir keep protecting the S’wak governor?’

Liew: No cause for MACC to reopen probe against Taib

Vent: Is Minister in the Prime Minister’s Department Liew Vui Keong suffering from a panic attack because he is under orders from the old man that the white-haired Melanau Raja of Sarawak is legally untouchable?

Is so much dirt going to be thrown at the venerable old man on this side of the South China Sea by the wizened one on the other side of the sea that the former has to muzzle the minister?

This is a very plausible conjecture. There is another one about a game plan to be executed full throttle by the old man here, but at the right time to augment Bersatu’s numbers and power, which will save Sarawak governor Abdul Taib Mahmud’s shrunken scalp from MACC chief commissioner Latheefa Koya’s clean-scraping scalpel.

Since she has assured us that MACC will be "whiter than white," we will hold our breath on this matter.

Meanwhile in Sarawak, its famed hornbills are squawking in sheer disbelief that the de facto law minister actually said there was no new lead for the MACC to reopen its graft probe against Taib.

They are the most reliable witnesses to the rapacious deforestation and timber logging by the Raja of Sarawak and family.

Avatar_3e8a: Why is Taib protected? Indeed, every Sarawakian can see the blatant evidence of corruption pervading every aspect of his or her life in Sarawak. And we have a law minister saying otherwise.

And worst of all, it is the ultimate betrayal for us long-time supporters of DAP, Pakatan Rakyat, Bersih and Pakatan Harapan. It just proves the old saying that politicians can never be trusted.

Why is Liew, and for that matter, Prime Minister Dr Mahathir Mohamad purportedly trying to protect Taib?

Liew is misleading the public by saying that the attorney-general and MACC have decided that there is no case to answer unless there is new evidence.

Liew never mentioned this, or at least Malaysiakini did not report him saying it.

There is a big difference because if the former is true, Liew is at best misleading the public, and worst, intentionally lying to the public – which begs the question, why?

Hopeful123: The former AG had also cleared Najib and company of wrongdoing. So why there are so many court cases against them?

Many billions can be salvaged if all the sharks are sued to return the stolen money to settle the nation's debts.

Rupert16: The question is not about reopening the probe, but asking: “Were the previous investigations thorough enough, or were they covered up, or constrained by political considerations?”

Truthseeker: Can you publish the previous investigation papers from MACC? Can you vouch for his innocence? How did he and his family accumulate so much wealth?

The Analyser: Hmm. I would have thought that it was MACC’s role to find the evidence if there is a reasonable suspicion that a crime has been committed. Apparently not so in Malaysia.

Anonymous #33227154: The current evidence according to whistleblower site Sarawak Report is more than enough for MACC to initiate an investigation of Taib.

Is Liew saying that Taib is cleared of all corruption allegations without any investigation? Is the government blind? Why do the government and Mahathir keep on protecting Taib?

Latheefa should not bow to this and must investigate the serious corruption allegations against Taib.

Hibiscus: "There is no obstruction for MACC to reopen its investigation if there is new evidence," Liew said.

Is the MACC under the dictates of the law minister as to whom it can investigate? If the answer is 'yes', then the MACC is not as independent as it should be in order to be meaningfully effective.

Malaysia My Home: I’m very, very disappointed to read this. Harapan, you have failed the rakyat.

Anonymous 5237890145285379: The Harapan government should step down if it can’t see anything wrong with a former chief minister going around in a Rolls-Royce.

Anonymous 2293481434643651: Taib ought to be investigated. If he doesn’t step down as governor, it will be a liability for Gabungan Parti Sarawak (GPS) during the coming state election.

The sentiments of the Sarawak voters against Taib and his cronies are so great that people will vote against GPS as many corrupted present leaders are still around.

Anonymous 770241447347646: This means that Harapan does not have an intention to prosecute Taib, or even investigate him.

The wealth of Taib and his family is open to public information. They could not, in a natural sense, own huge tracts of lands, overseas properties, and even cash with the income of a chief minister.

It is staring directly in our faces and yet, Liew, you say that there is no case.

What secrets do the BN and Harapan fear that Taib may reveal if he is brought forward to be prosecuted? Why fear opening Taib's file?

We can only conclude that there are secrets that might be revealed to implicate certain individuals in Harapan. Who else profited from his ravages of the state of Sarawak?

It looks like Taib and his family will not face the course of justice in this life.

In the meantime, it is up to the Sarawak people to seek justice by making sure the corrupted are not elected back again. Only they can stop the plunder and rape of Sarawak.

yoursay
abdul taib mahmud
macc
corruption
sarawak
crime
Related Reports
Taib is the ultimate test of MACC's credibility
a year ago
Why I’ve given up on Putrajaya dealing with Taib
a year ago
Yoursay: High hopes for Latheefa to reopen probe on ex-S'wak CM
a year ago
PSM: No-nonsense Latheefa's first task is to probe Taib
a year ago