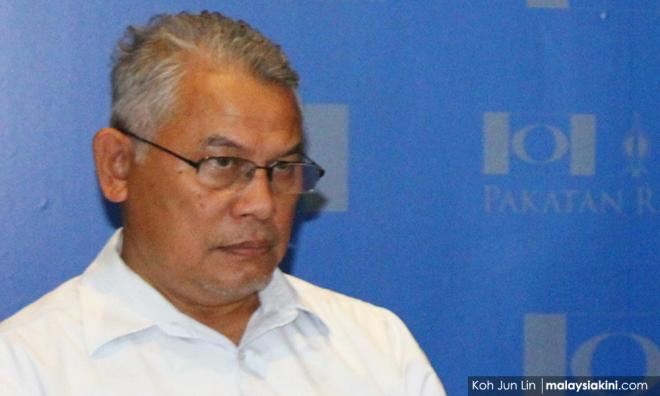 Amid attempts to downplay the existence of a rift which threatens to rip apart PKR, an Azmin Ali strongman did not mince words in urging Anwar Ibrahim to throw in the towel.

To illustrate his point, Khalid Jaafar, who is the economic affairs minister's adviser, cited the game of snakes and ladders.

“Anwar has only two more points to reach the finish line. Unfortunately, just at the last point before the end, he is swallowed by a snake.

“So he falls back to the starting line. Age has caught up, the journey back (to the top) is far. It is best for Anwar to retire from politics,” he said in a Facebook post.

Khalid, who once served as strategy and research development director in the Selangor Menteri Besar Office when Azmin helmed the state, also mentioned the idiom that those who dwell in glass houses should not throw stones.

“So say the wise. It appears that Anwar has forgotten these words, what more those aligned to him, who have probably never heard of these words,” he added.

Khalid then equated the current political situation to a game of poker, stating that Anwar and his allies are treating this like gambling.

“'Up the ante' is a poker term. This is what (PKR information chief) Shamsul Iskandar (Md Akin) did when he 'advised' Azmin to go on leave,” he said.

On Tuesday, Shamsul, who is also primary industries deputy minister, urged leaders implicated in scandals to go on leave in order for the police to conduct their investigations in an independent manner.

Although he did not mention names, his remarks were seen as targetted at Azmin who has been implicated in a sex scandal.

Following Shamsul's statement, Khalid claimed that Anwar, whom he described as being addicted to the prime minister's post, committed a “tactical blunder” by reiterating a similar stand.

“'Bola tanggung for Azmin' (a move which allowed Azmin to unleash a devastating strike).

“Responding calmly to questions from reporters, Azmin said, 'Read my lips, tell him to look at the man in the mirror' and therefore, the almost forgotten 'China doll' video was reopened.

“The inspector-general of police at the time had said forensics investigations showed the video was authentic. So did Anwar fall into Shamsul's trap... should Anwar reliquish his PKR president post?” he added.

Khalid was referring to a video recording in 2011 which implicated Anwar having sex with a woman, who is believed to be a sex worker.

Anwar had dismissed the video as fake.

Meanwhile, Khalid claimed that Anwar is impatient and is worried that others would overtake him to become prime minister after Dr Mahathir Mohamad relinquishes the post.

“So he throws stones at the person (Azmin) whom he considers as his rival. He does not realise that he lives in a glass house,” he said.

At a press conference in Parliament this afternoon, Anwar dismissed claims that his call on Azmin to resign if the sex video is authentic is related to the tussle over the prime minister's post.

Inspector-General of Police Abdul Hamid Bador has confirmed that the video is authentic, but the identities of the two men indulging in sexual acts could not be ascertained.

Azmin, who is also PKR deputy president, has described the video as a nefarious attempt to ruin his political careeer.

After Azmin's show of force, Anwar claims to possess numbers to be PM

Up to Anwar to mend the schism in PKR, says Zuraida