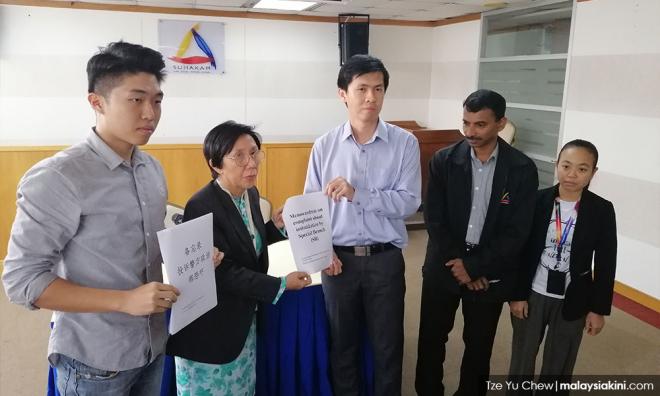 After being threatened by a Special Branch officer, two local activists lodged a complaint to the Human Rights Commission of Malaysia (Suhakam) and later made a police report yesterday.

“We organised a peaceful assembly and forum which promoted a rational dialogue. Why did the special branch officers want to harass us?,” Siah asked.

Wong stated that the culture of intimidation and power abuse still exists, a year after the change of government.

The two had been called in on separate days over different events, but both claimed to have been subject to intimidation by one Bukit Aman Special Branch officer identified as "Tuan Tan".

The officer also threatened to freeze their organisations and to prevent them from graduating and working.

After the intimidation was reported in Malaysiakini, Special Branch director Mohamed Farid Abu Hassan promised to investigate the incident.

In the memorandum, they demanded the police officer involved to apologise and resign.

They also want the special branch to be dissolved and replaced by an independent agency. They also requested the Independent Police Complaints and Misconduct Commission (IPCMC) to be set up soon.

Although the police had promised to investigate the incident, Wong complained to Suhakam that they have yet to receive any information.

Lok said that the commission will look into the incident according to the law.

Siah and Wong then filed a report at the Dang Wangi district police headquarters on the same day.

When asked why it took them more than 10 days to lodge a police report after the incident, Wong explained they initially wanted to make the report together with incoming Umany president Liew Liang Hong, after the latter was also summoned by the police.

However, Wong and Siah proceeded to lodge the report themselves after Liew’s summon was postponed.