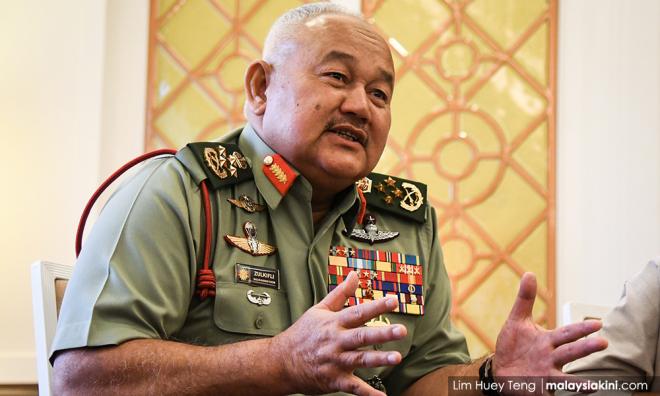 The Straits of Malacca is safe and there have been no external security threats, said Chief of Armed Forces (ATM) Gen Zulkifli Zainal Abidin (photo, above).

While countries can step up control and security as a precautionary measure, he reiterated that there was no indication that the nation’s waters were unsafe, he told reporters after receiving Inspector-General of Police Abdul Hamid Bador at the ATM headquarters at Wisma Pertahanan, Kuala Lumpur today.

Zulkifli was commenting on reports that China’s Transport Ministry had urged their shipping companies to enhance security when their vessels were in the Straits of Malacca.

Among the issues discussed were ATM's readiness in considering the police’s proposal for police personnel to get health services at military hospitals, while the navy talks were on improving security at the country's borders, including the Eastern Sabah Security Command (Esscom).

Related Reports
'Eksesais' the best platform to test Navy's preparedness
a year ago
Lima '19 to focus on UAVs, cyber warfare
2 years ago
Territorial dispute with S'pore handled by Foreign Ministry - Mat Sabu
2 years ago
If they don't block shipping, we can live with China: Dr M
2 years ago