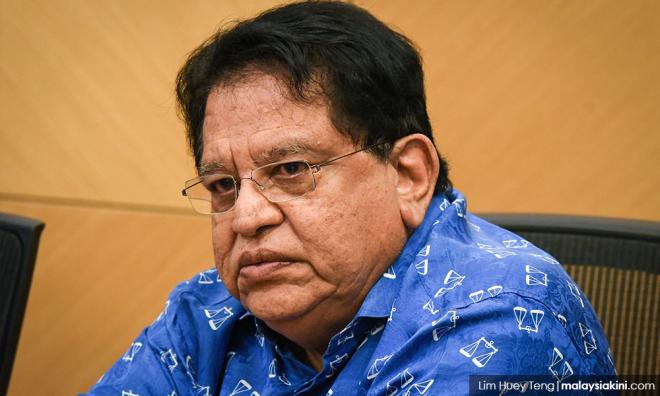 Aset Kayamas Sdn Bhd managing director Chai Kin Kong told the Kuala Lumpur High Court on Wednesday that the signature on the official receipt for the RM2 million political contribution he gave Umno was that of Tengku Adnan Tengku Mansor (photo, above).

The 19th prosecution witness said this when questioned by Tengku Adnan’s lawyer Tan Hock Chuan on whether he recognised the signature on the receipt.

Tan: You confirmed this receipt is the original copy?

Chai: I think this is the original because it is the only one that I received.

Tan: Based on this receipt, it is stated the signature is that of the Federal Territory Umno liaison chairman?

Chai, who spoke in Cantonese, which was then translated to Malay by a court interpreter, said: “I am illiterate”.

Tan was cross-examining Chai on the eighth day of the RM2 million corruption trial involving Tengku Adnan, who is former Federal Territories Minister.

Earlier, Chai, who had known Tengku Adnan for more than 30 years, said he received the official receipt for the RM2 million political contribution from Tengku Adnan himself on June 14, 2016.

On Tuesday, when reading out his witness statement, Chai confirmed giving an RM2 million cheque to Tengku Adnan as a political contribution and the latter mentioned that Umno needed about RM5 million to RM6 million for its by-election funds.

Tengku Adnan was charged in his capacity as a public servant, namely, Federal Territories Minister, to have accepted for himself RM2 million from Chai Kin Kong via a Hong Leong Islamic Bank cheque belonging to Aset Kayamas Sdn Bhd.

The cheque was deposited into the CIMB Bank account of Tadmansori Holding Sdn Bhd in which he had an interest when it was known that Aset Kayamas had a connection with his official duties.

The charge was framed under Section 165 of the Penal Code, which provides for a jail term of up to two years or fine or both, on conviction.