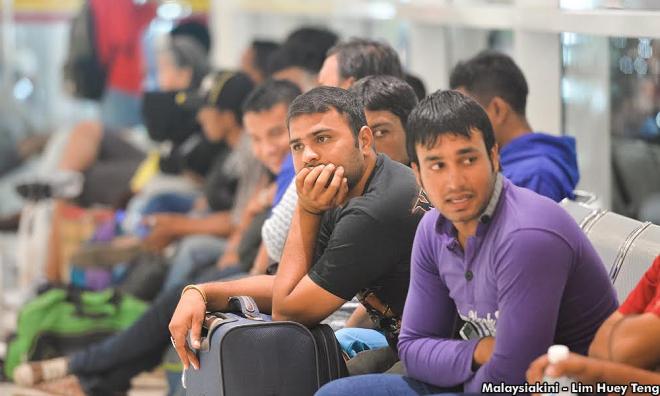 The government must stop using undocumented migrant workers as an additional source of income, a rights group said today following the announcement of the Home Ministry's latest amnesty programme.

Tenaganita executive director Glorene Das stressed that the government has an obligation to assist undocumented migrants, as many have fallen victim to fraud in relation to previous amnesty programmes.

"Workers have paid a high amount of fees to the government for the rehiring programme so we (the country) have an obligation to them.

"We must stop using them as our ATMs," Glorene (photo) said in a statement.

The 3+1 Amnesty Programme, which ended on Au­­g 30 last year, saw the government reportedly collect RM400 million in compounds from the 840,000 undocumented migrants repatriated.

Three companies had been hired to carry out a rehiring exercise for undocumented migrants, but Tenaganita noted that the move failed to address the root cause of the issue.

"In fact, the rehiring programme, which began in early 2016, has not been transparent as it involved brokers and sub-agents in the regularisation process, leaving thousands of foreign workers with undocumented status and until today, they are unaware their status.

"Can there be any redress and justice for these workers?" she asked, noting that many undocumented migrants had paid thousand of ringgit only to be fooled by rogue agents.

In announcing the government's Back For Good Amnesty Programme yesterday, Home Minister Muhyiddin Yassin (photo) said the government had no obligation to assist workers who are reluctant to leave because of disputes with their employers.

Das, however, argued that the government must come up with a national comprehensive policy for labour migration, and take into account the years of input by Tenaganita and other stakeholders.

The latest amnesty programme for undocumented migrants begins in August and lasts until midnight Dec 31.

Eligible migrant workers are required to surrender themselves at 80 immigration counters across Peninsular Malaysia, together with valid travel documents and a one-way ticket to return to their country of origin within seven days.

A reduced compound of RM700 each will be imposed on all migrants who accept the terms of the latest programme.

BWI-MLC spokesperson Nor Azlan Yaacob stated the RM700 fine would only serve to disincentivise them from coming forward.

Azlan claimed many migrant workers wishing to leave were impoverished and taken advantage of by unscrupulous employers.

Many may have had to pay for their own food and lodgings "with wages that are far below the minimum wage of RM1,100," he said.

"A quick check with our fellow union affiliates from the various countries of origin of migrant workers in Malaysia gave us a rough understanding of how far the RM700 will help sustain a decent living for those returning to their villages with meagre savings.

"In Bangladesh, it is estimated that RM700 will allow them to pay a two-month rent, or pay one-year school fees for a child.

"In Nepal, our counterparts made an approximation that RM700 will help a family of five to cover school fees and household provisions for at least two and a half months," he added.