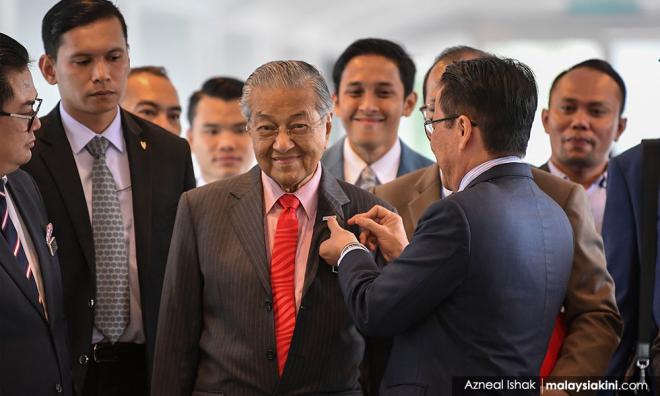 Mahathir's approval rating improved to 55 percent in May and to 62 percent as of last month, according to a survey by independent pollster Merdeka Centre.

His improved approval rating comes on the back of Malay and Chinese voters who have once again warmed up to the Langkawi MP after a consistent decline in support until March, according to the survey reported by The Malaysian Insight.

Satisfaction towards Mahathir among Malay voters was at 50 percent as of June, a 16 percent improvement from March.

Likewise, satisfaction among Chinese voters improved by 16 percent to 77 percent within the same period.

However, satisfaction among Indian voters declined six percent from 80 percent in March to 74 percent in June.

Harapan's approval rating on a downtrend

Meanwhile, Pakatan Harapan's approval rating stood at 41 percent in May, and remained the same in June.

There is no data point between January to April, but it has been on a downtrend since the May 2018 general election.

Since December last year, the satisfaction level towards Harapan had declined by eight percent among Malay voters to 32 percent in June this year.

As of June, 40 percent of voters thought the country is moving in the right direction, an improvement of six percent from March.

Voters who think the country is moving in the wrong direction also declined from 46 percent to 38 percent in the same period.

Broken along racial lines, 31 percent of Malay voters believed the country was moving in the right direction as of June, compared to 24 percent in March.

Likewise, 53 percent of Chinese believed the country was moving in the right direction, compared to 43 percent in the same period.

However, this figure declined from 63 percent to 45 percent in the same period among Indian voters.

The top three reasons cited for the improved sentiment towards the government are good administration (18 percent), fight against corruption (15 percent) and improving the economy (10 percent).

Conversely, the top three reasons cited by those who believe the country was headed in the wrong direction are economic concerns (32 percent), leadership (12 percent) and weak administration (12 percent).

The survey of 961 respondents was conducted between June 28 to July 1.

For good governance, not a never-ending 'Game of Thrones'
19 Jul 2019
MTUC pans surveys on when Dr M should step down as PM
18 Jul 2019
IDE survey: Most don't want Mahathir to stay as PM past 2 years
17 Jul 2019
Don't hide behind Dr M, PKR deputy minister tells leaders implicated in scandals
16 Jul 2019