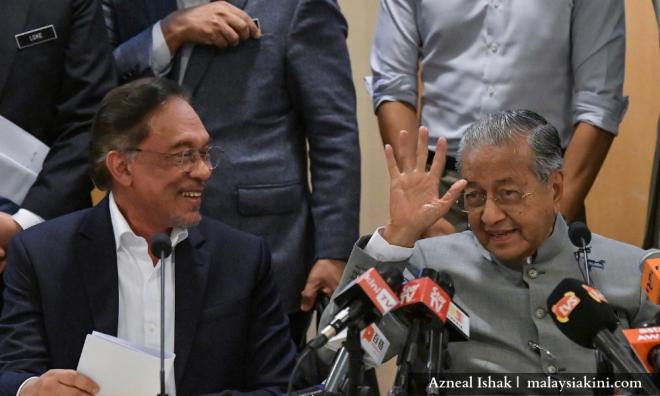 Listen to Dr M and cut out the internal bickering

So runs the opening line of the fictional but realistic novel Romance of Three Kingdoms in China.

All that which unites shall eventually divide; all that which divides shall ultimately unite. Politics is a game of musical chairs in which one can be caught without any seat of power, and stand embarrassed and exposed.

But politics according to Max Weber, a 19th century German sociologist, can also be a vocation.

It is not the perpetual search for the relative gains, but the effort to get things right for the society writ large. Leaders can achieve the latter on the basis of their charisma, rational authority and bureaucratic-legal system of governance.

Politics, despite being defined often as the art of the impossible, one in which there are no permanent friends but only permanent interests, does have a dimension that is completely and permanently altruistic.

Malaysia should aspire to achieve what Prime Minister Dr Mahathir Mohammad advised, "close ranks” in Pakatan Harapan to focus on moving ahead as a single formation. Every electoral mandate is a test of one's ability to achieve good governance.

There are five worrying trends in the world that can affect Malaysia in a precarious manner. First and foremost, the Regional Comprehensive Economic Partnership (RCEP) will not be completed this year, as only 30 to 40 percent of the issues have been resolved, while India remains adamant in its belief that any further concession by New Delhi will result in a flood of heavily subsidised Chinese goods in India. RCEP is a no go for now.

Second, with Malaysia's gross domestic product projected to grow at a clip of 4.1 per cent to 4.4 percent next year, Malaysia's economy will be lethargic at its best. China is growing at 6.2 percent, and it is one of the lowest economic growth since China opened up its economy.

Thus, even if Malaysia can export durians to China, the Chinese economy remains too weak to assist Malaysia, either on palm oil or a property glut that is now a major problem throughout Malaysia.

Third, the Sino-US trade conflict has now metastasised into a sub-regional trade conflict between Japan and South Korea too. Japan began restricting exports to South Korea of three specialised chemicals used to make semiconductors and smartphones, and this can hamper the exports and economy of South Korea.

With Japan and South Korea locked in a head-butt, there is no way they will take Association of Southeast Asia (Asean) seriously. The New Southern Policy of President Moon Jae In, in other words, can face some serious head-winds, even if the new Ambassador to Asean had been accredited to the regional body.

Fifth, the powerful economies are all going digital. Malaysia hasn't even gone beyond Go Grab. Even Go Grab has been hijacked by Singapore. There are four Unicorns in Indonesia already. The digital trade of Indonesia has reached US$27 billion a year, with the possibility to hit US$300 billion a year. Their GDP has crossed US$1 trillion too. Malaysia has to work thrice as hard, if not more, at keeping up with Indonesia, potentially to help them create a new capital; just as Putrajajaya was launched some 20 years ago.

Without the spirit of unity, Harapan will be delivered a technical knock out in 2023 come the next general election.

The return of the Umno and PAS kleptocrats back into the saddle of the government cannot be ruled out if the current fighting persists.

To be the Asian tiger, Harapan cannot be mauling each other, whether it be between internal party factions or between parties within the same coalition.

That would be no different from the self-inflicted death of a thousand cuts. Let's heed the good reminder by Mahathir at the PKR retreat and Bersatu EGM yesterday