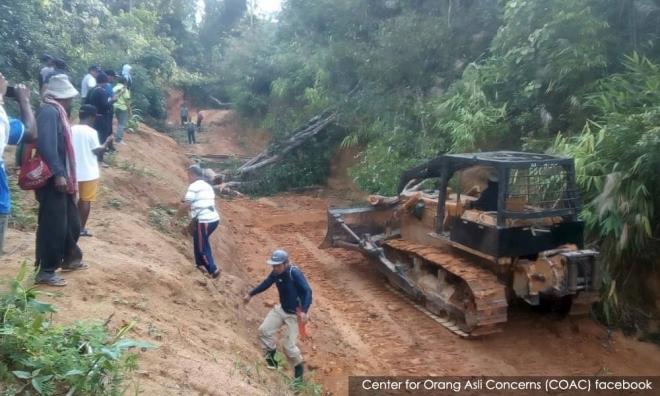 Editor's Note: Police have clarified that investigations are being conducted under Section 341 of the Penal Code, not Section 431. This article has been amended to incorporate the clarification.

The Temiar community in Kampung Sungai Papan, Gerik has been hit by fresh arrests by the police despite a plea by Minister in the Prime Minister's Department P Waythamoorthy.

The Centre for Orang Asli Concerns (COAC) said three Temiar villagers were arrested this morning during an operation to take down the blockade the community had rebuilt yesterday to keep loggers out.

"Three Temiars have been arrested - Johari Aleuj, Pam Yeek and Shukri Man. Also seized were five motorcycles and a camera.

"They are being taken to Gerik police station now," COAC said in a statement on Facebook.

It added that the police officers were led by one "Sgt Hashim" and were not in uniform.

"There people were arrested under Section 341 of the Penal Code," he told Malaysiakini.

Section 341 of the Penal Code states that those convicted for wrongfully restraining others from proceeding in any direction are liable for a maximum jail term of one month or an RM1,000 fine, or both.

Last Saturday, three other Temiar villagers were also arrested when police and loggers brought down a blockade at Kampung Sungai Papan.

They were released after an appeal from Waythamoorthy (below) who urged the police not to side with loggers.

Following last Saturday's incident, the Temiar villagers had vowed to rebuild the blockade, which they did yesterday, resulting in the latest incident.

The Orang Asli community there allege that the loggers are violating their customary land, but the Perak government insists it has the right to grant logging permits for the area.

"Until the legal boundary of Orang Asli’s land rights is determined, I am of the view it is illegal for state authorities to unilaterally grant permits for developers to encroach and exploit the rights of these defenceless people without prior informed consent," he had said.

However, his call appears to have fallen on deaf ears.