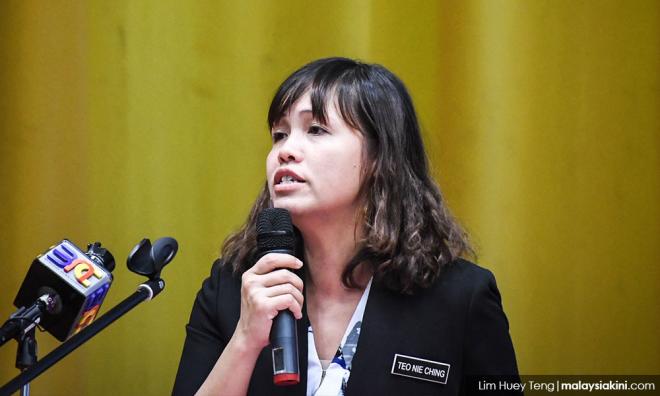 No new subjects on democracy or the Federal Constitution will be introduced in the next schooling session, Deputy Education Minister Teo Nie Ching (photo, above) said today.

On the other hand, she said the existing curriculum and syllabus would be improved upon to enable the youth to be more in tune with the democratic system in the country.

She said this included increasing the content on elections in the Form Four History textbook from the current five pages to 19 pages, beginning next year.

Teo said this during a question and answer session at the Dewan Negara today when answering a supplementary question from Senator Khairul Azwan Harun who wished to confirm if there were any new subjects which would be introduced in school, as part of the country's move to allow youths aged 18 to vote for the first time during the next General Elections.

Commenting further, Teo said, among other things, the Federal Constitution would also be given a dedicated chapter in the Form Four history textbook with 17 pages of content.

"We are in the process of enhancing and strengthening education on democracy in textbooks for forms Four and Five, while for Form Six, it will also be included in the General Studies and History subjects. We are also in the process of reviewing the STPM examination syllabus, " she said.

However, she explained that to date, elements of democracy and the Federal Constitution were already part of the syllabus from Year Four in primary school, until Form Six.