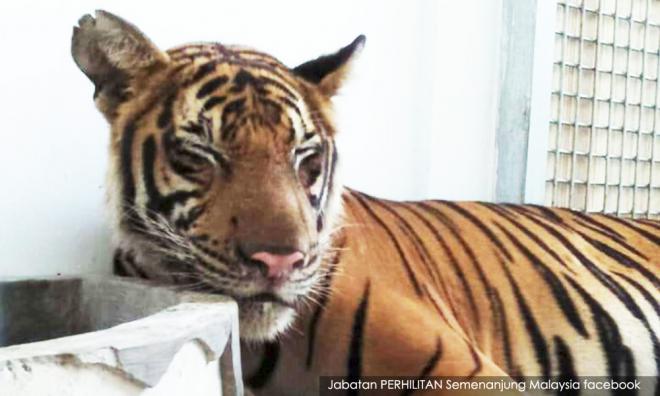 A male tiger which was caught by the Wildlife and National Parks Department (Perhilitan) after wandering in Kampung Besul Lama, Bukit Besi, Terengganu last Friday, has died due to canine distemper virus early Tuesday morning.

Perhilitan, in a statement said the Malayan Tiger known as ‘Awang Besul’ was confirmed dead by the department’s veterinary doctor at the National Wildlife Rescue Centre (NWRC) in Sungkai here at about 5.30am despite the intensive efforts to treat and save the tiger “Physical check on the field last Friday found injuries to its legs, an eye infection. It was dehydrated when it was captured.

“The tiger also displayed unusual clinical neurology signs such as non-aggressiveness, turning in one direction when walking, seizures and clinical signs of the respiratory tract infections such as nasal discharge. The treatment given was symptomatic or supportive treatment,” it said.

According to the statement, the virology results that was received yesterday confirmed Awang Besul tested positive for Canine Distemper Virus, and a post mortem would be conducted soon.

Canine Distemper is a disease caused by a virus which attacks domestic animals such as dogs or other wildlife, including the tiger species.

The statement said if tigers are affected by this disease, it will display behaviours such as being unafraid of humans and the probability of it recovering would be very slim.

Perhilitan does not rule out the possibility that the canine distemper which Awang Besul suffered from was spread by wild animals around the village, and anyone with information is advised to contact the department at 1-800-88-5151.

Last Friday, Awang Besul, estimated to weigh about 130 kilogrammes, was caught at about 3.30pm after being shot with a tranquilliser dart and was quarantined.

The five-year-old tiger was caught while it was resting in the bush about 500 metres from the main road.