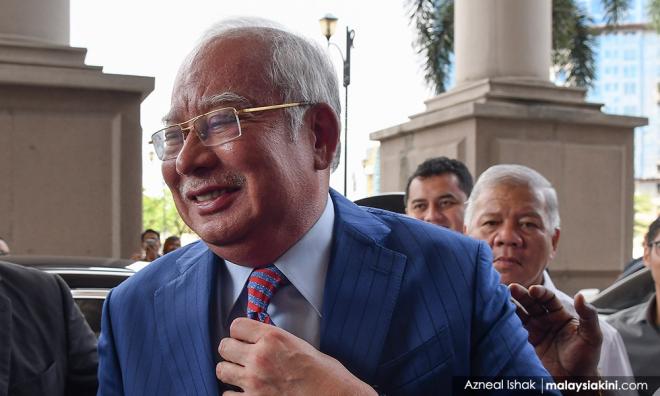 Former prime minister Najib Abdul Razak (photo) will file an application for a stay of the proceedings of Inland Revenue Board (IRB)’s lawsuit seeking him to pay RM1.69 billion in income tax, pending an appeal on the tax assessment to IRB.

Najib’s lawyer Muhammad Farhan Muhammad Shafee told the media that the IRB’s lawyers indicated to the Kuala Lumpur High Court that they were also planning to file an application for summary judgment (notwithstanding that there is an appeal on the tax assessment).

Summary judgment means a judgment entered by a court for one party upon another party’s motion based on facts that have been provided without going for a full trial.

“Today was the case management for the tax suit which I attended via e-review. We indicated to the court that we are intending to file a stay of these proceedings pending our appeal on the assessment to IRB.

“This is an unfortunate case of pay now talk later, except pay now is to the tune of RM1.69 billion which will effectively bankrupt my client and disqualify him as a member of Parliament.

Hence why we are filing for a stay of proceedings of this matter pending the resolution of the assessment,” he said.

Muhammad Farhan said the court fixed Aug 30 for the next case management before Nurliana.

On June 25, the government through IRB filed the suit against Najib seeking him to pay a total of RM1,692,872,924.83, with interest at 5% a year from the date of judgment, as well as cost and other relief deemed fit by the court.

The government claimed that the notice was sent via registered mail to Najib on March 25, 2019, to his last known address at Jalan Langgak Duta, Taman Duta in Kuala Lumpur and the mail was never returned to IRB.

It also said that Najib was given 60 days to pay the taxes, together with the 10% increase, but still failed to do so.