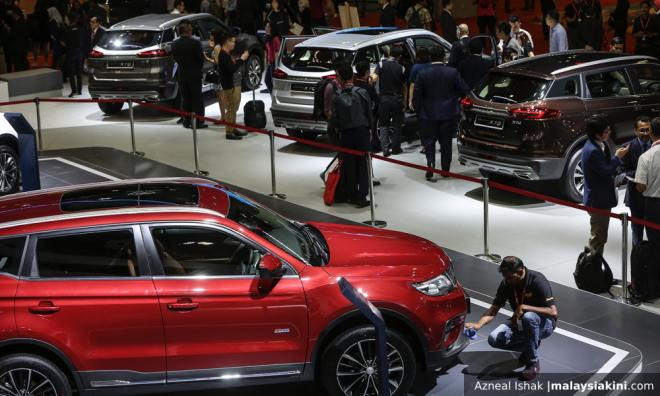 Yoursay: X70 may save Proton, but at whose expense?

YOURSAY | 'It is the national car policy that should be debated, as it makes all cars more expensive.'

The farce that is the Proton X70

Professori: Good article by columnist P Gunasegaram on the Proton X70 SUV. Many of us right-thinking Malaysians were cursing this national car concept more than 35 years ago.

We do not have any comparative advantage at all in this field. We should have been attracting manufacturers of tyres, oleochemicals and solar panels here instead.

Anonymous_7b825f63: This is all because of one man's stubbornness and ego. From the start, the national car was a no-brainer. We knew 30 years ago that it was a money pit for his bumiputera agenda.

Now after countless of billions wasted, we have nothing to show for it. Worse still, he wants to start another car company at a time when big established Japanese and American car companies are dying a slow and painful death.

If you say Zhejiang Geely Holding Group Co Ltd, which owns a 49 percent stake in Proton, is ripping Malaysians off, you can also say Starbucks and many other foreign brands are doing the same.

It is not the X70, but the national car policy that should be debated, as it makes all cars more expensive.

Removing the policy would mean that the government loses billions of ringgit in revenue – which it will have to make up by other means, so it is not as simple as the article makes out. One has to see both sides before coming to a conclusion.

DoIR: A substantial amount that we pay for the price of the vehicles is actually duties to the government. Each year, the government collects a few billion from car buyers indirectly.

There is no possibility of giving up this revenue source unless our economy is doing extremely well, and a programme is implemented – say over eight to 10 years – to even out the pricing, so that the various complementing and supporting sectors, like financiers, used car dealers, etc, can adjust accordingly.

Our model of production is obviously faulty, as latecomers like the Koreans and Thais are already global players and manufacturing hubs in the region.

After trying and failing for three decades, maybe we should think and be considerate to the masses by extending more connectivity to our LRT and MRT.

On hindsight, with the billions we spent on the national car, if we had then embarked on improving rail connectivity, the B40 and M40 may have a better living standard now.

It’s not too late if we really want to lighten the burden of these groups by focusing more on new modes of public transportation.

With better connectivity, hopefully the new generation can redirect the purchase of this depreciating asset to property investment.

Can our government make this decision? It’s not too different from the idea of selling the Malaysia Airlines – which also isn’t working after several rescues and tens of billions down the drain.

Shibboleth: The Economic Affairs Ministry should scrutinise the deal. Better still, look at billionaire Syed Mokhtar Albukhary's business empire. He seems to have a finger in every pie.

At least, in the old days, Prime Minister Dr Mahathir Mohamad handed out contracts equally to his ‘Magnificent Seven’.

But a few perished along the way, including the one that crashed our national airline.

Retnam: Gunasegaram, does the tax money go to the government or the car companies?

The Wakandan: @Retnam, a ‘yes/no’ question can hardly make a meaningful argument. Sure, the tax goes to the government, but so are those from other cars purchased.

The crux of the article is that the profiteers are not ordinary Malaysians, which should be the case if the national car really accomplished its objective.

But as Gunasegaram implies, they are Geely and Syed Mokhtar.

Proton, in other words, is a farce that profits a few individuals and a foreign company at the expense of the money which the government used to prop it up.

Thickskin: Surely we cannot expect a completely built-up car to be priced similar to the price in the country of origin? The writer is trying to confuse the readers.

After all is said, the Proton X70 is much cheaper than comparable cars like the Honda CRV and Mazda CX-5. So, what's the beef?

Roger 5201: Without Geely's investment, technology and management, Proton would be as good as finished, taking with it an entire industry and tons of Malaysian jobs.

It takes integrity, vision, dedication and hard work to build a global brand, not mere subsidies.

This is why Malaysia has been left far behind by Korean and Chinese carmakers after re-badging old Japanese models for 40 years, never mind the subsidies.

Let's just be thankful for screw-driving jobs for now and access to a 1.4 billion-strong Chinese market and others along the Silk Road with future local models.

Anonymous #33227154: Why does Malaysia even need a national car? This is not even our forte. So, is having the national car(s) a means to pander to Mahathir's ego and benefit his cronies?

The biggest losers are Malaysians who are forced to pay much more for foreign cars, just to protect Proton's monopoly.

The huge amount of money spent on supporting Proton could be better used to improve our public transport system.

But then most politicians just want to benefit themselves, not the people.