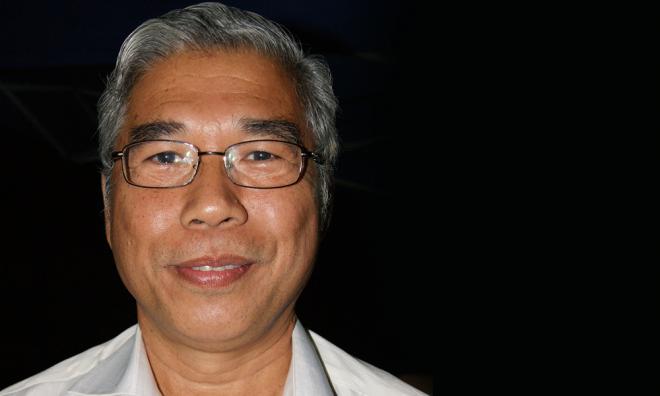 Online portal The Malaysian Insight today quoted Hassan (photo, above) as saying that the residents were angry as they have yet to receive any financial aid from the state government.

"The MB has a moral obligation to come and explain to the people the current situation.

"I challenge him (Sahruddin) to come here and meet the people. The people here are suffering and are demanding answers," Hassan was quoted as saying.

In March, chemical waste dumped into Sungai Kim Kim in Pasir Gudang caused some 2,775 people falling ill from exposure to toxic fumes, with up to 200 – including schoolchildren – being hospitalised, 111 schools were temporarily shut down, and the Johor government left with a cleaning bill exceeding RM6 million.

Hassan was further quoted as saying that he would challenge Sahruddin (above) to debate if the Bukit Kepong assemblyperson refused to meet with Pasir Gudang residents and address their concerns.

"The people here are very angry. Come and give them the assurance that the state government will do whatever to handle this issue.

“When in a crisis, the leader of the state must come and see what is happening for himself, not just give orders from his office," the former Johor PKR chief said.

The Malaysian Insight also quoted residents group Taman Pasir Putih pro-tem committee deputy chairperson Rafee Abdullah as saying the people were angry as they have yet to see or meet the MB.

"When he was in the exco (as state Health, Environment and Agriculture Committee chairperson), he said he will come here during the Sungai Kim Kim incident.

"But he didn’t come. It’s the same even after he became MB," Rafee said.

"We have also sent him a memorandum on our plight but we have yet to get a response," he added.

In March, the Johor state government approved an emergency allocation of RM6.4 million to clean up Sungai Kim Kim.

Sahruddin, who then chaired the Johor health, environment and agriculture committee, had said the work included cleaning up a 1.5km stretch of the polluted river.

Malaysiakini has contacted Sahruddin for comment on Hassan's latest claim of his absence from the area.