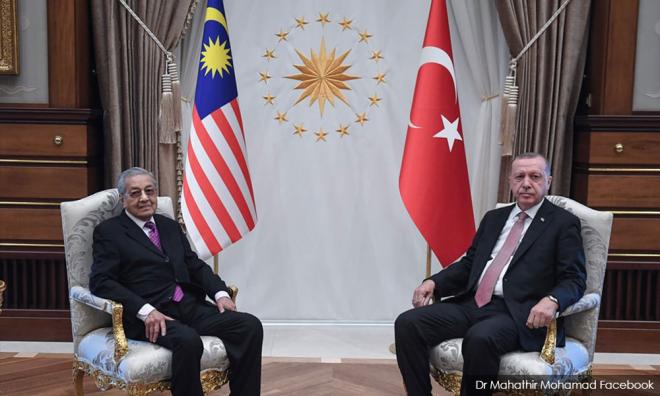 Turkey and Malaysia - time for a strategic reset

COMMENT | Turkey may seem to be drifting. Despite more than four decades of attempting to be in the European Union (EU), its membership status is nowhere close to where it should be. Nor does President Recep Tayyip Erdogan harbour any deep belief in the EU process.

Perhaps due to this, Turkey and Malaysia's bilateral relations are ready for a strategic reset. The reasons are ample but only five need to be amplified.

Malaysia can be the hub by which Aselsun and Rocketsun sell their defence equipment to the rest of the region, especially when great power rivalry has returned with a vengeance.

Secondly, while Turkey is a sectoral partner of Asean, the Association of Southeast Asia Nations, of which Malaysia was a founding member, Turkey and Malaysia can build up a strong bilateral relationship to touch on issues that Asean is unable to broach in an open and direct manner, such as the plight of the 1 million Rohingya Muslims.

Some 1 million of them are trapped in Cox's Bazaar in Bangladesh. Their living conditions are extremely brutish and bad to say the least. Through the pressures of Turkey, and Malaysia, ideally with Indonesia in tow, the atrocious living conditions of the Rohingyas in Rakhine can be turned around. Indeed, 85 percent of those living in Cox's Bazaar are women and children; with another 500,000 Rohingyas left in Rakhine and Arakan in Myanmar.

Thirdly, with the rise in the tensions in the Persian Gulf and Gulf of Oman, all eyes will focus on the complexities and the instabilities of the Middle East and Persia.

Turkey and Malaysia can provide some semblance of stability to the world order by advising all sides, including the West, even China and Japan, not to rush into any hasty actions in that volatile region. Not surprisingly, on this trip to Turkey, Defence Minister Mohamad Sabu is accompanying Prime Minister Tun Dr Mahathir too.

Fourthly, Turkey is a bridge to Europe, and Eurasia, a geography not entirely different from Malaysia. Malaysia can function as a bridge to Thailand and Indo-China as well as Indonesia, if not the Indo-Pacific region too. Given the geographical depth of both countries, a lot can be achieved, especially through Turkish and Malaysian Airlines.

Finally, semi-governmental think tanks like SETA, with branches in Ankara, Istanbul and Washington DC have done a fine job of keeping the West informed of Turkey's foreign policy. Entities like DEIAK, which is the economic investment board of Turkey, has also tried to engage Asean. Malaysia can build a think tank with the same outlook and approach to reach out to Turkey.