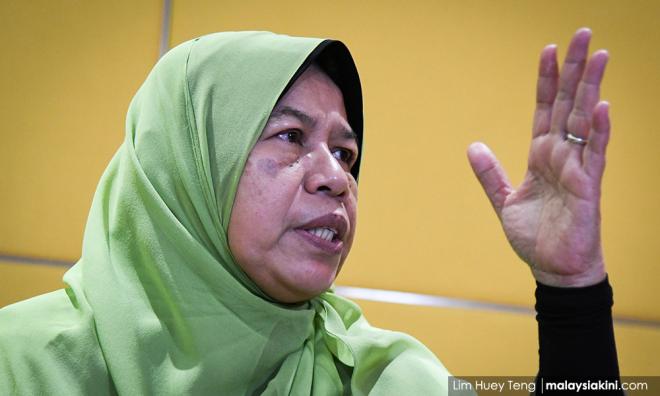 After pledges of support for Anwar, Zuraida calls for end to 'political stunts'

PKR vice-president Zuraida Kamaruddin has called for an end to “political stunts” which disrupt the process of nation-building.

"Stop serving partisan politics which people are sick and tired of. We need to focus on our duties.

"Stop disrupting the process of building a new Malaysia with political stunts which appear to be aimed at appearing relevant and being in the headlines," she added in a statement this evening.

Zuraida, who is aligned to PKR deputy president Mohamed Azmin Ali, pointed out that Anwar was not challenged for the top post during the party polls last year.

Therefore, the housing and local government minister questioned the need for the pledges to support his leadership.

As PKR president, she said Anwar (photo) should instruct for such pledges to stop, as it cemented the perception of a fissure within the party.

The pledges of support come amid tensions between Anwar and Azmin over a sex video implicating the latter.

The president, however, has made overtures aimed at mending ties and refused to entertain questions regarding the scandal this afternoon, saying: "We move on."

Previously, Inspector-General of Police Abdul Hamid Bador said while the video was most likely authentic, the facial recognition process failed to link Azmin to the recording of two men in bed.

The police chief also disclosed that a political leader was behind the distribution of the video to tarnish the minister's reputation and hundreds of thousands of ringgit were spent on producing the recording.

Azmin, who is also economic affairs minister, has claimed that the video is an inside job aimed at ruining his political career.

Speculation is rife that the video is related to the tussle over the prime minister's post due to claims that Prime Minister Dr Mahathir Mohamad prefers Azmin to succeed him, despite an agreement that the baton will be passed to Anwar.

Anwar, whose political secretary was among those detained in connection with the case, has denied involvement in the matter.