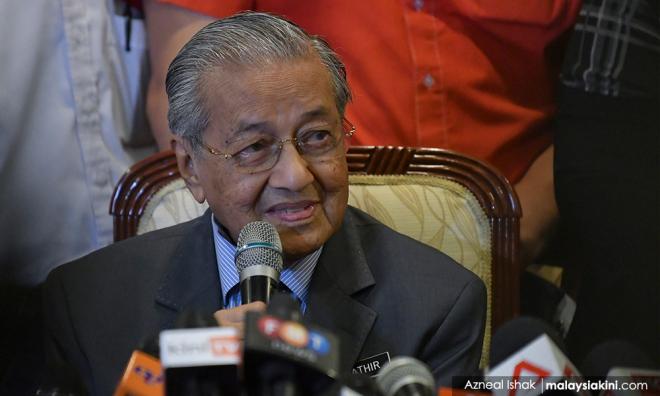 Prime Minister Dr Mahathir Mohamad has denied taking a contradictory stand on alleged sexual improprieties involving his minister in 1998 and a present member of the administration.

In a blog posting, Mahathir alluded to his sacking of Anwar Ibrahim as then deputy prime minister and how the alleged sex videos only emerged afterwards.

"There is no contradiction. The action taken in 1998 was not based on the video clip. That came later.

However, Mahathir did not provide any details on the alleged videos purportedly linked to Anwar at the time.

Mahathir further said the situation then was unlike the current alleged sex scandal videos, which he believes is part of a larger plot to remove Economic Affairs Minister Azmin Ali (below).

"In this recent case, the video came first.

"Obviously, it is an attempt to blacken the name of the particular person in order to blight his future," further claimed Mahathir, who reiterated that he will not be party to such alleged attempts.

"If I were to take the action expected of me, I would become an accessory to the plot.

"I have no intention of becoming the instrument of the plotters. I will not be a part of such dirty politics," he stressed.

This comes following criticism by former premier Najib Abdul Razak who highlighted the differences in Mahathir's responses to sexual allegations against Anwar in 1998 and Azmin.

Soon after, then-Santubong PKR Youth chief Haziq Abdullah Abdul Aziz (above) confessed to being one of the men in the videos and named Azmin as the other. Haziq has since been sacked from the party.

Azmin denied the allegation and characterised the videos as a nefarious plot to destroy his political career.

The police are investigating the case, and have arrested several people – including Haziq, an unnamed PKR assemblyperson, and Perak PKR chief Farhash Wafa Salvador Rizal Mubarak – to assist in their probe.

Inspector-General of Police Abdul Hamid Bador said last week that the videos are believed to be authentic, but that the facial recognition software used failed to ascertain the identities of those involved.

Hamid also revealed that a leader of a political party was behind the videos, and that “hundreds of thousands of ringgit” had been spent to produce them.