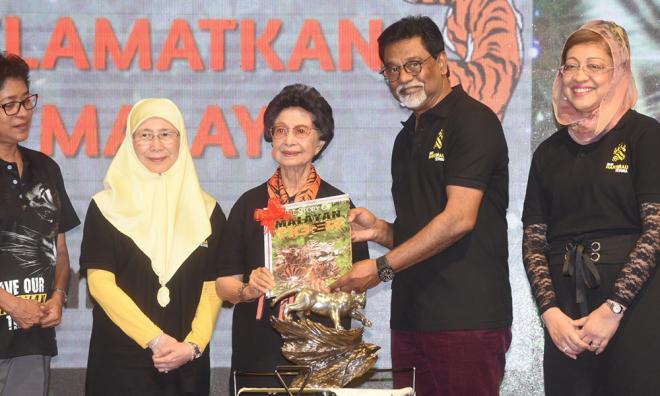 Siti Hasmah who is also the patron for "Save Our Malayan Tiger Campaign", named the two male cubs Wira and Hebat.

“The female cub I name Melur,” she said in her speech at a ceremony in Putrajaya today.

Siti Hasmah who had just arrived from Turkey after accompanying Prime Minister Dr Mahathir Mohamad for a working visit there said that she had wanted to hug the cubs which were born at the zoo on May 1.

“But when I went to Zoo Negara last week, the cubs were three months old and had already grown to a height of three feet. I could not hug them, instead they started roaring when they saw me,” she said.

The three cubs are the offsprings of male tiger Jati and female tiger Kaila belonging to Zoo Negara.

Siti Hasmah also shared her closest encounter with a tiger.

“I had always wanted to face a tiger. The closest I did was at The Lost World of Tambun where I managed to get the feel of a young tiger licking my palm when I fed it with a slice of chicken.

“It was such a thrill. I could feel the tongue,” she further said.

In the same speech, Siti Hasmah called for everyone to work together to protect the Malayan Tiger to ensure that the population of the tiger, which now stands at 200, would increase to 500 in future.

According to data from Water, Land and Natural Resources Ministry, in the 1950s, there were more than 3,000 Malayan Tigers in the country.

She said the Malayan Tigers needed to be protected from extinction as the animal was featured in the nation's coat of arms to symbolise strength.

In the ceremony, Siti Hasmah also received contributions amounting to RM1.33 million from private companies, NGOs, universities and schools including the Al-Bukhary Foundation and staff of ministries towards the Malayan Tiger conservation efforts.

The World Tiger Day is celebrated every year to inculcate awareness among the public on the importance of protecting, preserving and conserving this endangered species.

In the ceremony, the participants were also treated to a video of two groups of Malayan Tigers featuring a pair of mother and cub and another female tiger with her three cubs roaming in their natural habitat which was believed to be a national park in peninsular Malaysia.

The exact location of the national park had to be kept a secret to protect the animals from poachers.

tiger
zoo negara
dr siti hasmah mohd ali
Related Reports
Family starts campaign to preserve and protect tigers
a year ago
Tiger's death caused by virus, says Perhilitan
a year ago
Anxiety looms over tiger sightings, but Perhilitan says it's under control
a year ago
Perhilitan believes two tigers spotted in T'ganu could be 'pets'
a year ago