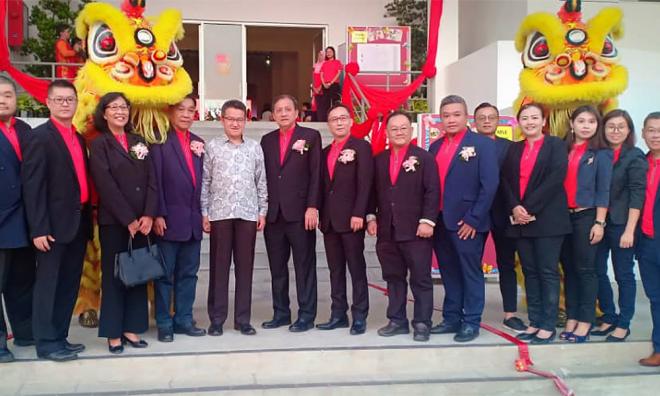 COMMENT | I congratulate the SJKC Chung Hua Klang School Board for the completion of the impressive multipurpose school hall and building.

In conjunction with this special occasion, I would like to talk about cultural confidence and mutual trust in a multiethnic society.

In the past, Malaysia was divided and ruled through fear. To be precise, fear of the "other". The Malays fear the Chinese; the Chinese fear the Malays, so on and so forth. This is particularly apparent in the cultural domain.

As a society, we lack confidence in our own identity. Therefore, we see the "other" as a threat. Some Chinese fear that the Malay officialdom would attempt to eliminate their cultural identity. Some Malays think that the Chinese are scheming to dominate the Malays. There are politicians and media that thrive on such fear and suspicion.

To move forward as a cohesive nation, we should celebrate our collective heritage of being multilingual.

In general, Malays speak Bahasa Melayu in different dialects such as Kelantanese, Javanese, Kedahan, etc. Likewise, Chinese and Indians who speak Malay can converse in multiple dialects too. In Sabah and Sarawak, Bahasa Melayu is widely spoken yet there are a lot of dialects.

Most Chinese and Indians of the younger generation speak very fluent Bahasa Melayu. Some Malays who attended Chinese schools can speak and comprehend good Chinese.

There are about 15 percent non-Chinese students in Chinese primary schools. I have also personally met some Chinese in Penang who speak fluent Tamil. The list goes on.

We should imagine a Malaysia where everyone can master Bahasa Melayu and English, and many Malays have good command in Chinese, some Chinese are fluent in Tamil, and many of us can comprehend Iban, Kadazandusun, Bidayuh and Bajau language, etc.

We must always respect Bahasa Melayu as the national language. Yet we have a lot to gain when we can master more than one language or dialect.

Therefore, it is regrettable that the introduction of artistic appreciation of “khat” or calligraphy, a form of Jawi script in Standard Four textbook has become an issue after Sin Chew Daily turned it into a front-page headline.

No sufficient understanding of Bahasa Melayu

Lost in translation, in the case of the Sin Chew Daily front-page story, happens when one does not have sufficient understanding of Bahasa Melayu, and its history and development.

Jawi is translated into Chinese as a "wen" (文) , which can mean a language or script, but mistaken by many as language. Hence the uproar among Chinese readers about not wanting to learn a new language which must have confounded non-Chinese speakers.

After all the years under the divide and rule atmosphere, Malaysia has become a society that lacks mutual understanding and mutual trust. Many of us do not know that the khat (above) is just like any form of calligraphy. It is an artistic form of font, symbol or writing that can be visualised in any languages.

The textbook, which devoted six pages to the subject, is only meant to introduce the artistic aspect of the khat.

In my case, I was fortunate to study a Classical Malay course under the late Ian Proudfoot, a renowned Malay philologist, during my years at the Australian National University. As part of the course, I spent six weeks with him to learn Jawi script, and read Hikayat Hang Tuah and Sejarah Melayu through Jawi.

The experience was one of the joyous parts of my tertiary education. My identity did not change. It just enriches my experiences.

The change of government in May 2018 is the beginning of a long journey for a better Malaysia. We now have the opportunity to rebuild Malaysia, with a twenty-year horizon.

We must do it with new assumptions, new concepts and new ideas. This applies to institutional reforms, the economy, defence and security, and culture and identity.

I sincerely hope that in the years to come, we build a Malaysia that is multilingual and multicultural, not living apart as separate communities, and building the confidence of oneself as well as the "other" by trusting one another.

LIEW CHIN TONG is a DAP senator and deputy defence minister. This is his speech at the opening of multipurpose school hall and building of SJKC Chung Hua Klang, Selangor.