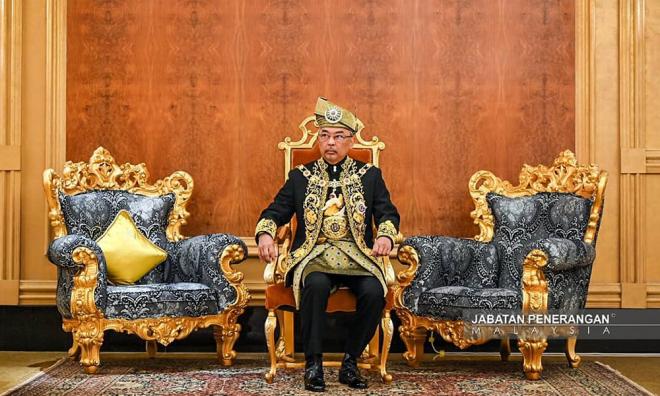 The installation of Sultan Abdullah Sultan Ahmad Shah as the 16th Yang di-Pertuan Agong is set to take place today in a ceremony steeped in royal Malay customs and tradition at Istana Negara.

To be held at the Balairung Seri of Istana Negara, the installation ceremony will formally mark the beginning of the five-year reign of Sultan Abdullah as the head of state of Malaysia.

The installation will be of historical significance and sentimental value to Sultan Abdullah and Tunku Hajah Azizah Aminah Maimunah Iskandariah as it takes place on his 60th birthday.

As part of the preparations for today’s event, Istana Negara, as the grand venue, has been meticulously decorated to add gaiety to the occasion, highlighting its stature as the landmark of the constitutional monarchy system.

Istana Negara’s grand chamberlain Azuan Effendy Zairakithnaini said: “The time has come for the 16th Yang di-Pertuan Agong to be installed, with the legacy to uphold the Institution of constitutional monarchy.”

The installation ceremony itself, dignified and resplendent, stands testament to the perpetuity of the reign of the monarch in the 62 years since the independence of the country.

Fifteen rulers have been installed in a similar ceremony steeped in tradition.

This will be the second time that a sultan from Pahang is installed as the king. Sultan Abdullah's father, the late Sultan Ahmad Shah Sultan Abu Bakar reigned from April 1979 to April 1984.

Sultan Abdullah was proclaimed as the sixth sultan of Pahang, succeeding his father on Jan 15, and was elected as the 16th Yang di-Pertuan Agong by the Conference of Rulers on Jan 24 and sworn in on Jan 31.

“The preparations at Istana Negara have been meticulously made to meet the expectations of Their Majesties and, of course, without a flaw or imperfection.

"With the help of the thousands who are involved (in the preparations), we pray that all the hard work will materialise,” said Azuan Effendy.

About 700 guests, comprising the Malay rulers, governors and cabinet ministers, are expected to attend and witness the ceremony.

Among them will be foreign royal dignitaries, including Sultan Hassanal Bolkiah of Brunei, and Abu Dhabi Crown Prince Sheikh Mohamed Zayed Al-Nahyan.

The ceremony begins at 9am and will be broadcast live by RTM and other television stations.