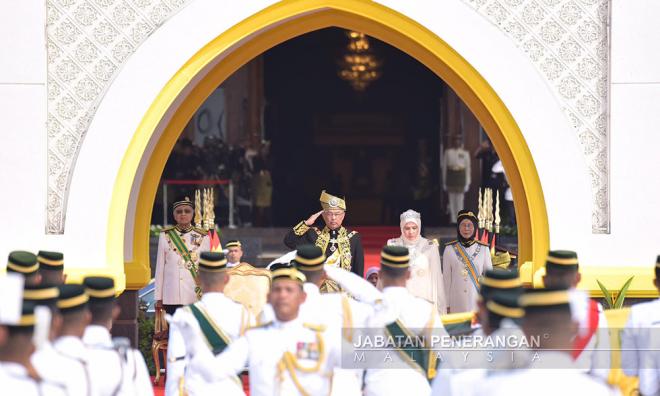 The installation of Al-Sultan Abdullah Ri’ayatuddin Al-Mustafa Billah Shah as the 16th Yang di-Pertuan Agong today began with a royal salute steeped in military tradition at the main square of Istana Negara.

The ceremony, involving members of the Malaysian Armed Forces, symbolises the pledge of loyalty of the national defence forces to the Yang di-Pertuan Agong as the supreme commander of the Armed Forces.

Their Majesties then proceeded to the royal dais.

Once Their Majesties were on the royal dais, the King was accorded the royal salute by the guard of honour mounted by members of the first battalion of the Royal Malay Regiment.

The national anthem was then played and the royal standard of the Yang di-Pertuan Agong was hoisted.

Once the inspection was completed, His Majesty was accorded the second Royal Salute and the national anthem was played.

Their Majesties then alighted from the Royal Dais and entered Istana Negara for the installation ceremony.

The ceremony was broadcast live via the national television station which allowed the public to witness the historic event, which also falls on the King’s 60th birthday.

Apart from the Malay Rulers and their respective consorts, the Crown Prince of Abu Dhabi, Sheikh Mohamed Zayed Al-Nahyan and the Sultan of Brunei, Sultan Hassanal Bolkiah and his consort Raja Isteri Pengiran Anak Hajah Saleha were also present at the ceremony.

Also in attendance were representatives of the Malay rulers, heads of state, the prime minister, the deputy prime minister and cabinet ministers, as well as other distinguished guests comprising foreign envoys and senior government officials.

Once Their Majesties were seated, the grand chamberlain then requested the King's consent to begin the installation ceremony by bringing in a copy of the Quran and the rest of the regalia into the Balairung Seri including the Keris Panjang Diraja (Government Keris), the Proclamation Letter, and the Oath of Installation.

The Quran, which symbolises Islam as the official religion of the country, was then presented to Sultan Abdullah, who kissed it before placing it on a table to his left.

The grand chamberlain then presented the Proclamation Letter to Prime Minister Dr Mahathir Mohamad who read it out and formally proclaimed Sultan Abdullah as the 16th Yang di-Pertuan Agong.

The Yang di-Pertuan Agong was then entrusted with the Government Keris, which he drew out, kissed, and returned to its scabbard and placed it on the table to his left, before taking the oath as Malaysia’s new King.

Right after the oath, the grand chamberlain led the hall in proclaiming "Daulat Tuanku", three times.

The national anthem was then played, along with a royal 21-gun salute.

Mahathir, representing the government and the people, then delivered his congratulatory message before Sultan Abdullah proceeded with his address to the people.

Following the royal address, the Istana Negara's religious Officer, Abd Aziz Che Yacob recite the Doa Selamat prayer and the grand chamberlain then collected the Quran from the throne before declaring the installation ceremony had been officially completed

The royal couple was then escorted out of the Balairung Seri by the grand chamberlain and ceremonial chief, accompanied by warriors carrying the royal regalia.

Sultan Abdullah was sworn in and signed his oath of office as Malaysia’s new King on Jan 31 to replace Sultan Muhammad V who stepped down on Jan 6.

His Majesty was proclaimed as the sixth Sultan of Pahang, succeeding his late father Paduka Ayahanda Sultan Ahmad Shah Al-Musta’in Billah, on Jan 15 and was elected as the 16th Yang di-Pertuan Agong by the Conference of Rulers on Jan 24.

arts & culture
yang di-pertuan agong
Related Reports
Father often reminds me to be humble, courteous - Tengku Hassanal
a year ago
Sultan Abdullah to be installed as 16th Yang di-Pertuan Agong today
a year ago
Tunku Azizah finds a place in the hearts of the people
a year ago
Agong calls for a united M’sia, free from chaos
a year ago