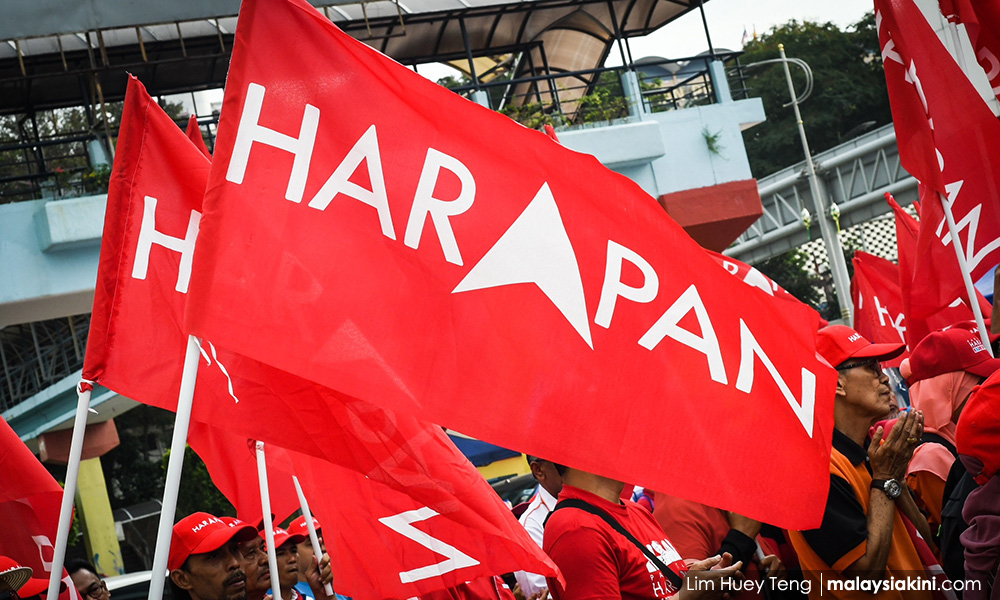 YOURSAY | 'If Harapan wants to have treaties adopted, go and do the work, rather than blame others.'

6th Generation Immigrant: Let's ask ourselves some simple questions first regarding that "deep state" before we start blaming everyone or worse, use the deep state as a consistent excuse to cover up the current government's own failures.

What are the objectives of the deep state? What are they made of in terms of membership?

How is the deep state funded? Is it crowdfunded or is there a continuous flow of funds from definite sources inside, or outside, the country? What form of communication does it use and what is their management or organisation?

All deep states must rest behind existing and functional facades before they one day unmask themselves. Which industrial or financial facade can accommodate such covert movements in Malaysia? None, as far as one can see.

It may be that what is termed a deep state by some politicians of the current government is just them blaming the poor losers of the last elections who are fighting dirty, in an unprincipled manner and with lack of human integrity to get back on the gravy train they had lost.

This lot is not the "deep state", they are just political discards using gutter politics and underarm tactics to destabilise the current government. They will disappear soon enough when the funding is gone and the drivers behind the scene are in prison.

The real deep state in Malaysia belongs to the various sects of an official religion.

They can organise kidnappings and kill opposition members. They are well funded and organised. Their facades are existing and recognised bodies in the administration.

They have their own enforcement teams or they can easily get government enforcement agencies to undertake their dirty tasks in the name of religion and officialdom.

The stories of the International Convention on the Elimination of All Forms of Racial Discrimination (Icerd), Orang Asli conversions, Project IC, citizenship, Indira Gandhi, Pastor Raymond Koh, preacher Zakir Naik, and more all smack of involvement of that real and true deep state.

JW: Foreign Minister Saifuddin Abdullah, whether there is a deep state or not, you have the levers of power. You can’t do anything except to complain?

Even if there is a deep state, isn't it time for you and the Harapan government to come up with a plan to deal with it?

So, with four human rights treaties slated to be voted on soon, have you ever thought about doing some of the things done by people in the public relations profession?

I know there are some unethical practices in public relations, but there are also good practices that you can adopt and implement to promote the ideas of the four human rights treaties in all corners of Malaysia.

This will make it so that the rakyat even in rural areas get to hear about these treaties and why they need not fear what the opposition, especially PAS, has been telling them.

Do the hard work. Ideas cannot simply be accepted just because you announced and like these ideas.

People need to be convinced and be comfortable with the policies. Have debates with those who opposed the four human rights policies so that the rakyat can be convinced by you.

All that does not happen only in one day or even a week. So, don't start the plan of educating and promoting those ideas only a day or two before the vote for them comes up.

In short, if you and the Harapan government are serious about having those human rights policies adopted in Malaysia, go and do the work, rather than blaming the opposition or the deep state for spreading lies and fear.

But based on how Icerd and Rome Statute went down, I suspect the main stumbling block is that Pakatan Harapan is not united on championing the human rights policies because of the “ketuanan” ideology.

BRoch: Come on Saifuddin, the voters are no longer gullible. It’s really members in the Harapan coalition who do not want to see the treaties signed.

The reason for this is that certain rights and privileges will no longer be relevant to a certain group. And you can’t afford to lose their already dwindling support. And you create a so-called “deep state” which is a figment of your collective imagination to put the blame on.

Your audience is not as stupid as you make them out to be. Not like during Umno/BN’s time.

Stop assuming the rakyat is dumb, and tell the truth. You may actually be able to arrest your flagging support.

The DDS consists of people within the Harapan governement like Saifuddin himself who are not doing anything to smother the "deep state". The reasons vary from moral cowardice, indifference and more sinisterly, direct collusion with the "seep state".

Prime Minister Dr Mahathir Mohamad told a big fat lie to the United Nations when he said Malaysia would ratify international treaties on human rights such as Icerd.

At home Mahathir told us that it was going to be difficult to ratify Icerd because it conflicts with the Malaysian constitution.

This sadly gave ammunition to the Malay racists and the opportunistic opposition parties to threaten violence and demonstrations if Icerd was ratified by the Harapan government, and Mahathir buckled to their demands with alacrity.

How can the Malay ruling elite continue to shame and insult their community by portraying them as racist and bigoted, when they adhere to the notion that they have more rights than the Orang Asli or other non-Malay citizens of Malaysia?

Mahathir was stridently anti-apartheid when he was prie minitsterduring his first tenure but his hypocrisy is revealed by his racist politics at home. His new party shamelessly denies non-Muslim and non-Malays the right to join as equal members and they cannot hold elected office.

If this is not apartheid then I do not know what is. The Malaysian constitution was never intended to create a racist apartheid state which Mahathir turned Malaysia into by way of shocking constitutional amendments and a deliberate and perverse interpretation of our constitution.

The Malay special privileges was meant to have a limited time frame and was formulated purely to redress a perceived imbalance. The Reid Commission, which was involved in the Merdeka Constitution, was uncomfortable with the idea of privileges in perpertuity and recommend that it be reviewed after 15 years.

It is now half a century past the review date and Malays are still told by their political leaders that they are incompetent, stupid, insecure and that Islam is under threat despite all the protection afforded which other races or religions do not enjoy.

Bersatu is a destabilising force in Harapan which was formed ostensibly to offer us a new paradigm of governance based on equality, religious pluralism and unity.

Unfortunately, Mahathir's politics is incorrigibly racist and religiously bigoted and this has informed his modus operandi throughout his career. The fact he has been trying hard to undermine Anwar Ibrahim's PKR and his open invitation for Umno and PAS to join Bersatu, tells us of his 'deep state' activities within Harapan.

The Malay Harapan leaders are the real problem. They fail to see the 'deep state' from within themselves.

ChuenTick: Saifuddin, there is no need for a “deep state”. You folks are already doing a great job of sabotaging the administration of our country.

That said, yes, I do agree with you, there is indeed a deep state working to ensure that Harapan does not succeed in putting on a good show. Well, you folks have only yourselves to blame.

Enlighten: You are afraid of losing power and don’t have the guts to push through reform agendas. Instead, you lay blame on the deep state.

Bibut: The deep state also needs a deep pocket. Keep following the money trail, flush them all out.

Roger 5201: If by "deep state", Saifuddin is trying to name the un-nameable, we understand perfectly where he is coming from.

It is also time for Harapan to deal with it and get on with the business of running the country.

Hafidz Baharom: It’s rather shallow to blame everything on the deep state when a lot of it is caused by government incompetence and flip-flopping.

We’re not in a Will Smith, Gene Hackman movie filled with conspiracy theories and needing to blow up a building over a phone call.