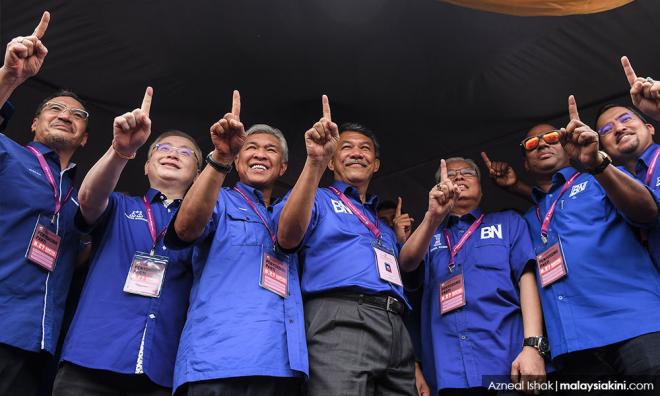 BN has no appeal to youth

COMMENT | There was a stage, when the average tenure of the cabinet members in BN, just before the retirement of Dr Mahathir Mohamed in October 2003, was close to 18 years.

In other words, had Pakatan Harapan not defeated BN on May 9 2019, the ministers would have out-served all their secretaries-general, including many constituents whose age would be 60 and above.

If one looks at the formation of BN now, or what remains of it, they are formed of the same old faces: Najib Abdul Razak, Ahmad Zahid Hamidi and Mohamad Hasan. Over in PAS, Abdul Awang Hadi is well past his date of expiry in politics.

Of course, ageism cannot be used as a factor to challenge BN. After all, the chairperson of Bersatu, Mahathir, is already 94 and still bursting with energy, truly the Special One. Anwar Ibrahim, the president of PKR is 71. But the likes of other leaders are barely 40 or 45. We even have one at 26.

By GE15, the voters' age of eligibility would be 18, through automatic registration too. Nearly 7.9 million youths would be granted the right to vote. Why would these youths necessarily go to the corner of BN?

Those in Sabah and Sarawak, especially, are sick and tired of the old faces who, for lack of better words, defaced their forests and enriched themselves. Why would Malaysian youths in West Malaysia stick with BN, let alone MCA or Umno Youth, who have been drawing blanks?

In fact, over the last six months, none of the MPs, state assemblypersons and senators of BN had done much. Of the 20 senators who did not show up at Parliament to approve the lowering of the voters' age, some 18 of them were from BN. How can BN champion the youth, when it does not even have their senators show up at the critical hearing?

Besides, the run-up to GE15 is to get ready for GE16 too, when all the first time voters would have reached the age of 23, and ideally have a degree in hand, and ready to consider their future livelihoods and career.

Where is BN’s roadmap or manifesto? Is it believable when they cobble it together with PAS, a party that has never emphasised the importance of any manifesto, including their own in the last general election.

With all of the above structural and intellectual disadvantages, including the total lack of youth appeal, why should BN be confident of its chances to defeat Harapan?

Harapan is not perfect. It is capable of making mistakes. We do see a hiatus in being able to provide cohesive governance. Not forgetting the never-ending game of thrones in its succession plan.

But Harapan has gone after the kleptocrats' money lock, stock and barrel. Thus, be it GE15 or GE16, as long as Harapan focuses on a strong and actionable manifesto, BN and PAS would be waylaid through their primitive emphasis on race and religion only.

Harapan must focus on delivering its manifesto. The five important issues that concern the people most are: mitigating the costs of living, enhancing the quality of life, creation of new and high paying jobs, building affordable homes and providing affordable healthcare.

If it does, then BN will have to wait for some time before they get back as the government.