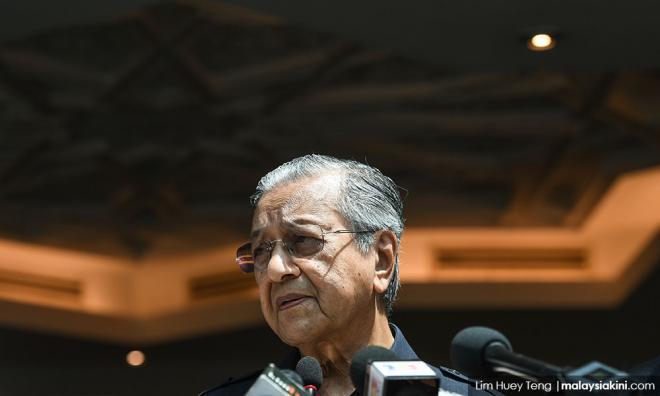 But who was it that created the 'deep state'?

COMMENT | You have to laugh at the way one Pakatan Harapan leader after another is now trying to justify their broken election promises by pointing to this newfound mysterious 'deep state'.

First, it was Foreign Minister Saifuddin Abdullah who said that the “deep state” in Malaysia is out to undermine the Pakatan Harapan government.

This was after the prime minister had said there was an attempt to get the rulers to sign an order against the government’s decision to ratify the Rome Statute of the International Criminal Court.

Now, Saifuddin adds that the deep state is at work to sabotage the Harapan government’s plans to sign four other human rights treaties.

It didn’t take long for former opposition leader Lim Kit Siang to latch on to this newfound excuse for Harapan’s failure to deliver on the promises in its election manifesto.

“The deep state in Malaysia is an important reason behind the slow progress in institutional and political reforms for New Malaysia," he said.

"The deep state would be even more assertive and obstructive if it is convinced that the Harapan government is only for a short period of time and would dissolve in a matter of months.”

This deep state is so enigmatic that these Harapan leaders say “it can be inside the government and you can’t identify it.” Very soon we might hear reports of mass hysteria breaking out during a cabinet meeting!

These 'deep state' theorists (or are they more theologians?) refer to a 'state within a state' pursuing its agenda from outside the national political leadership.

We know that ever since the Harapan government came into existence under the leadership of Dr Mahathir Mohamad, there have been never-ending factional struggles which continue today, not only between coalition parties, but also within the component parties.

Let’s take the simplest case of a promised reform on which Harapan has reneged, namely the recognition of the Unified Examination Certificate (UEC) of independent Chinese secondary schools.

Are we to believe that this mysterious 'deep state' is also pressuring Harapan against recognising the UEC, leaving Harapan leaders in a state of paralytic inertia?

If the reference to the 'deep state' is about the increasing non-accountability of the police and the Special Branch and ever-encroaching bumiputeraism, this trend can be traced to the time when Mahathir stamped his authoritarian populist rule on the country from 1981.

In 1987, for example, my perceptions of the Special Branch were sharpened during my incarceration under the Internal Security Act 1960 during Ops Lalang.

In the interminable interrogation sessions with Special Branch officers, I was given the impression that they could get away with whatever they wanted.

Ops Lalang was, after all, the most extreme example of a regime that had taken the law into its own hands when it detained without trial a whole spectrum of dissidents it detested.

Mahathir, in recent years, has claimed innocence by passing the buck to the police.

According to former Bar Council president Param Cumaraswamy, this was Mahathir’s reply to a protest over Ops Lalang in 1987:

"If I have to resort to the ISA, it is because I am forced to by the irresponsibility of those who do not appreciate my liberal attitude and seem bent on destabilising this country.

"My responsibility is towards the vast majority who feel threatened by the race-baiting indulged in by a frustrated minority unable to impose their thinking on this country."

“It’s a police state when you can go and arrest people at will without giving any reason other than they think they are a security risk.

"I do not concede Mahathir’s contention that his measures are predicated solely on the extreme tension between Malays and Chinese last month which brought the country close to serious racial rioting."

"It’s not a question of Chinese against the government, but his own party, Umno, who are against him."

“Mahathir cannot shirk responsibility by passing the buck to the police, but must come clean and apologise to the nation for masterminding Ops Lalang, the darkest chapter of human rights in Malaysia, paving the way for a wholesale clampdown and subversion of the media, the judiciary and organs of state, whether the police, the Election Commission or the Anti-Corruption Agency in the rest of his premiership.”

And it was Mahathir’s bumiputraist populism that led to the scenario today, when Malay supremacists can threaten to unleash another May 13 incident if the government goes ahead with the ratification of the International Convention on the Elimination of All Forms of Racial Discrimination and other treaties that promote justice, equality and human rights.

Today, the Special Branch seems to have gone even further to the dark side in its covert operations.

Suhakam has accused it of being behind the enforced disappearance of two social activists, Amri Che Mat and Raymond Koh.

Note that Mahathir pooh-poohed Suhakam’s findings about the abduction of Koh (photo).

We have known all along that the Special Branch conducts surveillance, intelligence gathering, and infiltrations throughout all aspects of society, including ruling party politicians and even royal households.

When he executed his coup de grâce against Anwar Ibrahim in 1998, Mahathir revealed as much in press conferences, using intelligence which could only have come from the Special Branch and his other informers.

The latest video of an alleged minister in a homosexual liaison with another colleague is another example of such basic dirty tricks by Malaysian politicians. It is not the dark machinations by the so-called 'deep state'.

Mahathir, as prime minister, has always been close to the Special Branch and Abdul Hamid Bador, the newly appointed inspector-general of police, is his trusted ally.

As Murray Hunter said in an article on Asia Sentinel:

“The Special Branch is now in the hands of a person who has used it before to blackmail, silence, incarcerate, and detain his critics.

"Extra-judicial abductions are unconstitutional. Many detainees have been prisoners of conscience or prisoners for their religious beliefs."

Under Mahathir, the Special Branch is even more powerful now than it was under the last BN government.

Thus, if Harapan is really concerned about this 'deep state', their lawmakers should point their fingers at their 'great saviour' and make the Special Branch accountable to Parliament.

Mahathir will then not be able to pass the buck to the police in any arrests and detentions.

But please, Harapan, spare us the pseudo-theories about the so-called 'deep state' to justify reneging on your election promises.