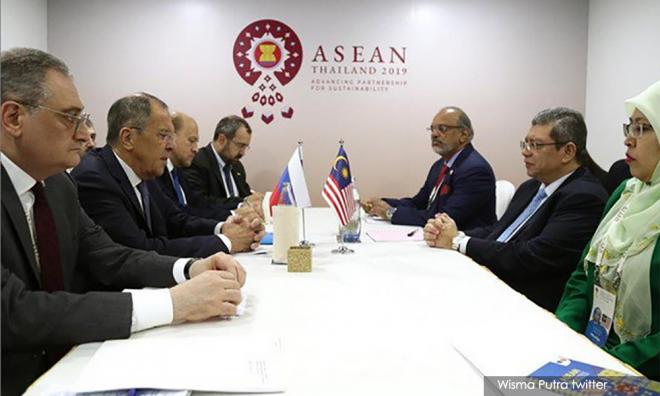 He said Malaysia and Russia were on the same page over the MH17 crash that killed all 298 people on board, including 15 crew members in 2014.

Asked whether ties between Malaysia and Russia had deteriorated following the tragedy, Saifuddin said “no”.

Saifuddin said Malaysia remained steadfast in ensuring the MH17 investigations were conducted in a proper, open and accountable manner.

Flight MH17 was flying from Amsterdam's Schiphol Airport to Kuala Lumpur when it was shot down near Torez in Donetsk Oblast, Ukraine, about 40 km from the Russian border, on July 17, 2014.

Passengers on board MH17 were from Malaysia, the Netherlands, Australia, Indonesia, United Kingdom, Belgium, Germany, New Zealand, Canada and the Philippines.

In the Netherlands on June 19 this year, Dutch-led international investigators charged four people – three Russians and one Ukrainian – with murder over the tragedy.

However, Prime Minister Dr Mahathir Mohamad said Malaysia was unhappy with the latest report, saying "there is no proof, only hearsay”.

On the bilateral meeting with his counterpart today, Saifuddin said they discussed a few matters including deepening cooperation in education and defence.

“We thank Russia for continuing buying palm oil from Malaysia, especially when we are facing a boycott from the European Union (EU).

“On education, we are sending more students to Russia to study medicine. Malaysia is happy with the advanced curriculum but we are also requesting for our medical students to be given more exposure in terms of practical training.

“Malaysia also wishes to enhance cooperation in defence. Russia is one of the biggest suppliers of defence equipment.

“I told my counterpart we would like to look into the possibility of enhancing cooperation, not just in buying or selling, perhaps in research and development too,” he said.

russia
mh17
saifuddin abdullah
world
Related Reports
Saifuddin leads M'sian delegation to Asean ministers' meet in Bangkok
a year ago
Five years on, flight MH17 families call for justice
a year ago
Transport organiser of MH17 missile is in jail, says Ukraine
a year ago
Gov't vows to continue to seek justice for victims of MH17
a year ago