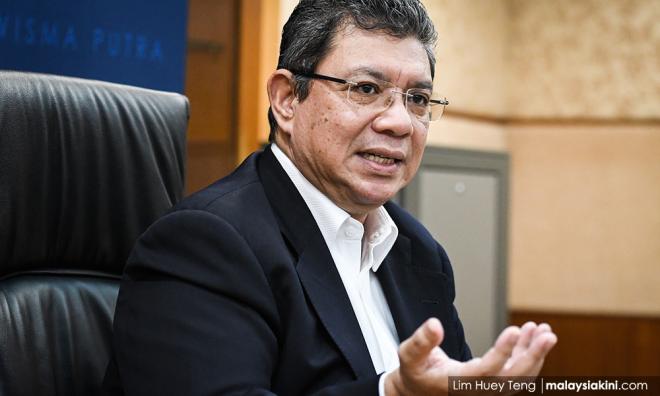 Rohingya not returning home due to trust deficit, says Saifuddin

Trust deficit remains among the Rohingyas and that has caused thousands of them to refuse to return home, said Foreign Minister Saifuddin Abdullah.

“We understand that the repatriation cannot happen as there is a trust deficit now.

“The Rohingyas don’t believe they are safe...Who wants to go back if you know you are not safe.

“There should be a clear understanding between the government of Myanmar and Bangladesh to ensure the repatriation of the Rohingyas can happen,” he told Bernama in Bangkok today.

Saifuddin said matters concerning the Rohingyas was one of the issues brought up by Malaysia in the AMM Plenary session chaired by Thailand Foreign Minister Don Pramudwinai today.

He also reiterated that the perpetrators of violence against the Rohingyas must be brought to justice.

It is reported that more than 700,000 Rohingya refugees fled to Bangladesh after a counter-insurgency campaign by Myanmar's military in the western state of Rakhine in response to attacks in 2017. The campaign led to accusations that security forces committed mass rapes and killings and burned thousands of homes.

Bangladesh is currently hosting over 1.1 million Rohingyas and has handed over a fresh list of 25,000 Rohingyas to Myanmar for verification before their repatriation to Rakhine state.

During the plenary session, Saifuddin also called for a review of the Terms of Reference (ToR) for the Asean Intergovernmental Commission on Human Rights (AICHR) to enhance its implementation and effectiveness in promoting and protecting human rights in the region.

“We are supposed to review the ToR to ensure AICHR more effective. This is to ensure there is a certain mechanism to lodge complaints if something happens in certain countries and places. Currently, there is no clear mechanism on how to complain and what action is to be taken by AICHR to address the issues,” he said.

Besides Malaysia, Indonesia, Thailand and Singapore had on numerous occasions expressed support for this overdue endeavour.

Meanwhile, Saifuddin also reiterated Malaysia’s support for Timor Leste to be a new member of Asean.

However, he said Asean was still on a fact-finding mission to evaluate Timor Leste’s membership application.

“We hope there will be a report on this. We are hopeful Timor Leste will become a member of Asean,” he added.