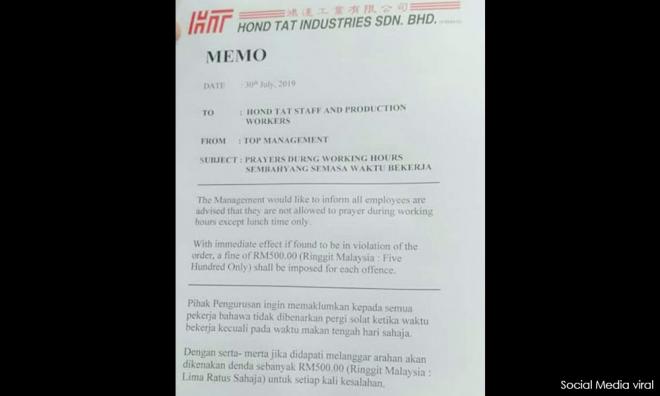 Conflicting accounts have surfaced with regard to an alleged memo barring staff of a Klang-based firm from praying during work hours.

The News Straits Times had quoted an operations manager of Hond Tat Industries Sdn Bhd (Hond Tat) dismissing the memo, which has gone viral on social media, as fake.

The operations manager, who was not named, also believed that the memo could be an act of sabotage.

However, Utusan Online later quoted an unnamed staff from the shopping bag and hygiene products manufacturer as confirming the prohibition.

Malaysiakini's repeated attempts to contact Hond Tat proved futile as the news portal was told that all the managers are engaged in a meeting.

In the New Straits Times report, the operations manager said Hond Tat planned to lodge a police report over the issue.

“This is an act of sabotage. There is no signature on the memo and no approval by the top management. Anyone can take the letterhead and print it.

“No Muslim staff (member) is forbidden from performing prayers during working hours,” added the manager.

The Utusan Online report, on the other hand, quoted the staff as claiming that the management retracted the memo after courting flak from netizens.

“The memo is real but this has been resolved.

“This happened because there was a misunderstanding by the non-Muslim company manager, who does not understand Muslim prayer times.

“A representative of Muslim staff at the company has since met with the management and the issue is regarded as solved,” said the worker.

“The management would like to inform all employees are advised that they are not allowed to prayer (sic) during working hours except lunchtime only.

“With immediate effect, if found to be in violation of the order, a fine of RM500 shall be imposed for each offence,” it read.

Meanwhile, the Human Resources Ministry urged the public to wait for accurate news on the memo rather than spread misinformation on social media.

The ministry issued a statement after taking into account the New Straits Times report.

It added that such complaints were usually investigated by the Labour Department.