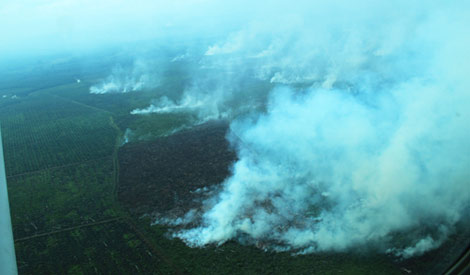 Indonesia is deploying thousands of military and police to douse forest fires after declaring an emergency in six provinces on the island of Sumatra and in the province of Kalimantan on Borneo island, reported VNA.

According to a spokesperson for the National Disaster Mitigation Agency, Agus Wibowo, the number of hot spots has been increasing, with 124 intense enough to suggest fires detected nationwide by July 31 morning.

The government has declared an emergency in the provinces of Riau, South Sumatra, West Kalimantan, Jambi, South Kalimantan and Central Kalimantan, where extensive peatlands are particularly prone to fires, he said.

Authorities have brought in 5,679 additional personnel to five of the provinces, drawn from the military, police and the regional disaster mitigation agency.

Aircraft that can run water bombing operations are being deployed. In Riau, disaster authorities have made available 17 helicopters, with 10 more pressed in from private firms, the military and the forestry ministry, he added.

The government is planning to make artificial rain to put out the fires.

Dody Usodo Hargo Suseno, an official of the coordinating ministry for human development, said nearly 50 million of Indonesia’s population of 260 million face drought in 28 of its 34 provinces.