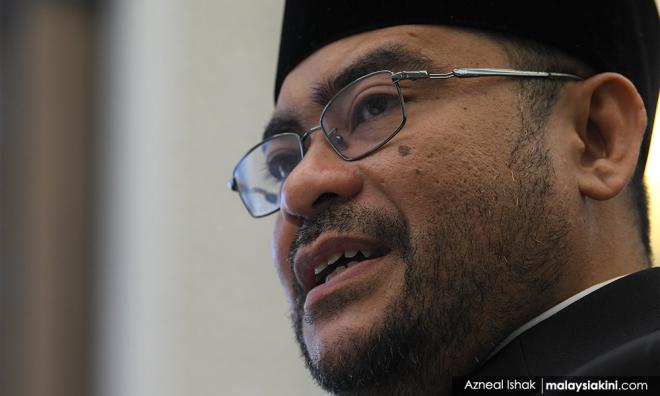 The seat for former prime minister Najib Abdul Razak at the installation of the 16th Yang di-Pertuan Agong on Tuesday had been determined and not moved at the last minute as claimed, said Minister in the Prime Minister’s Department Mujahid Yusof Rawa (photo, above).

Mujahid, who was chairperson of the Special Committee on the Installation Ceremony of the 16th Yang di-Pertuan Agong, said he had given an official reply to Najib on the allegation.

Najib claimed that he could not attend the function after receiving a call at 6.30am that his seat, which should have been number 10 as the former prime minister, had been changed at the last minute to the seat for "Orang Besar Pahang".

"The issue was not that it had been moved. The issue (Najib’s seat) had been determined. Then Najib himself had given the excuse that he had to be seated at the place for 'Orang Besar Pahang'. He had to change attire. That is his problem. We have informed (him) much earlier,” said Mujahid.

He was met by reporters on the issue after launching the logo for "Karnival Rahmah 2019" to be held at Dataran Putrajaya from Sept 26 until 29.

Among the contents of the carnival mooted by Mujahid to popularise the concept "Rahmatan Lil Alamin" were a mini carnival for children, mini housing carnival, book festival, an exhibition and a halal fun run.