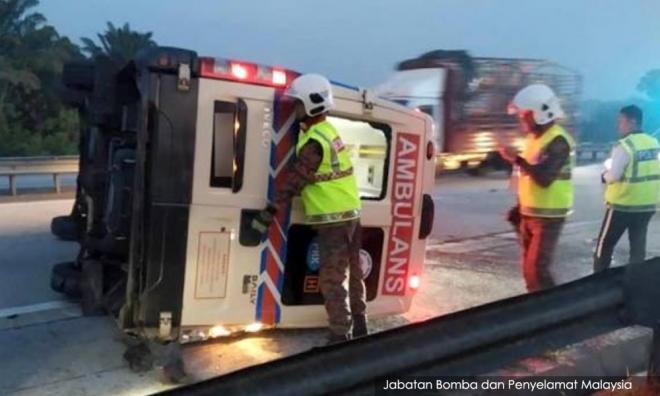 A burst tyre is believed to be the cause of the accident of an ambulance which killed the driver and the female patient being ferried.

The accident happened at KM368.4 of the North-South Expressway near Slim River at about 6.40am today.

Muallim police chief Wan Kamarul Azran Wan Yusof said police were notified at 7am and identified the driver as Mohd Hafidz Mohd Bahari, 37, and the patient as Azizah Dolah, 66, from Sungkai.

"Preliminary investigations indicate the right rear tyre had burst causing the ambulance to skid before it slammed into the side railing and overturned,” he said in a statement.

Wan Kamarul said the driver suffered serious head injuries, while the ventilator for the patient came off due to the impact.

He added that only Hairuazaini suffered injuries.

Earlier, a Perak Fire and Rescue Department spokesperson had said the driver died at the scene and the passenger at the Slim River Hospital.

The ambulance was ferrying the patient from the from Raja Permaisuri Bainun Hospital in Ipoh to the Slim River Hospital.