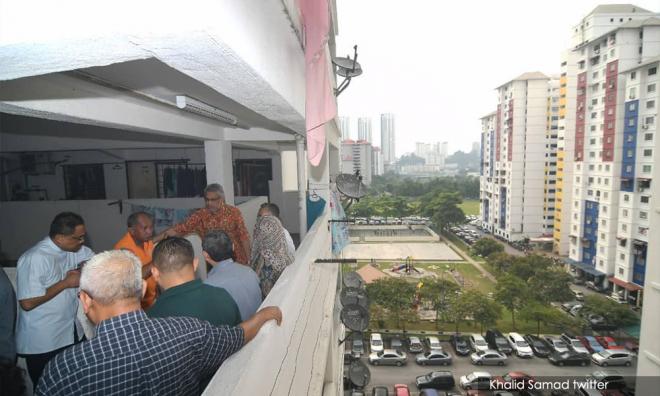 Federal Territories Minister Khalid Abdul Samad said today that there would be no compromise if negligence if found on the part of those responsible for maintaining the elevator that crashed at the People's Housing project (PPR) in Kampung Kerinchi on Friday.

"We will investigate and there will be no cover-up," he said after launching the Fly the Jalur Gemilang campaign in Putrajaya today.

"If it is a result of negligence or if the contractors were not doing their job, all this will be exposed.”

In the incident, eight people sustained injuries after the lift they were in malfunctioned before plunging from the fifth floor of the building.

Khalid said he understood there was a discussion yesterday between Kuala Lumpur mayor Nor Hisham Ahmad Dahlan (photo), the elevator contractors, and the Occupational Safety and Health Department, to discuss future actions, particularly with regard to the installation of elevators in new buildings.

Asked on press reports that the Kuala Lumpur and Putrajaya branches of Dosh had found that there were about 6,000 lifts that did not have certificates of fitness (CFs), Khalid said he was not sure if there are that many lifts servicing PPRs alone.

"As far as I know, the (lifts in) Kerinchi PPR have the CF, which is certified by Dosh,” he said, adding that the report may have included elevators in private buildings.

"If they are under the care of other parties in terms of enforcement, then it comes under the building’s owner and Dosh,” he said.

On DBKL's proposal that the elevator maintenance contractors carry out monthly inspections together with Dosh officers on 45 PPR elevators, Khalid said the maintenance system was jointly implemented by both Kuala Lumpur and Putrajaya branches of the department, which involves the drafting of rules and regulations on upkeep and repairs.

Khalid said companies who are given contracts to maintain the elevators in all buildings under the supervision of DBKL, and certified by Dosh and elevator manufacturers, are those with the requisite expertise and ability.

"If it is found that the contractor has not been maintaining the elevators properly, then action will be taken based on the investigations conducted,” he added.

On the Jalur Gemilang campaign, Khalid said it was held in conjunction with the Putrajaya Car-Free Day programme organised by PPj.

He also urged Putrajaya residents and visitors to not only fly the Jalur Gemilang on government, business and private premises, but also on their private and business vehicles.

Meanwhile, the Housing and Local Government Housing Ministry will convene a committee meeting involving all stakeholders to work out a mechanism on how to reduce the incidence of faulty lifts in the country.

Its minister Zuraida Kamaruddin (photo) said those involved in the committee included the National Institute of Occupational Safety and Health (Niosh), the Human Resources Department, the National Housing Department and the Fire and Rescue Department.

"We will call on all relevant parties to look at a mechanism that can be improved to ensure that all costs are properly managed, so that such incidents can be minimised," she told reporters after a working visit to the Klebang PPR today.

Commenting on the matter, Selangor Menteri Besar Amirudin Shari said the state government was constantly taking measures to repair infrastructure, including the maintenance of elevators at low-cost housing projects, though its Ceria (maintenance and recovery) programme.

As for the incident on Friday, where four visitors to the Kompleks Agama Bandar Baru Kuala Selangor were trapped for 30 minutes, Amirudin said the maintenance of the elevator was under the Housing and Local Government Ministry, as the premises belonged to the federal government.

He said this at the opening of the 3W (Wellness, Welfare and Women) Carnival at Dataran Shah Alam, which was officiated by Tengku Permaisuri Norashikin of Selangor.