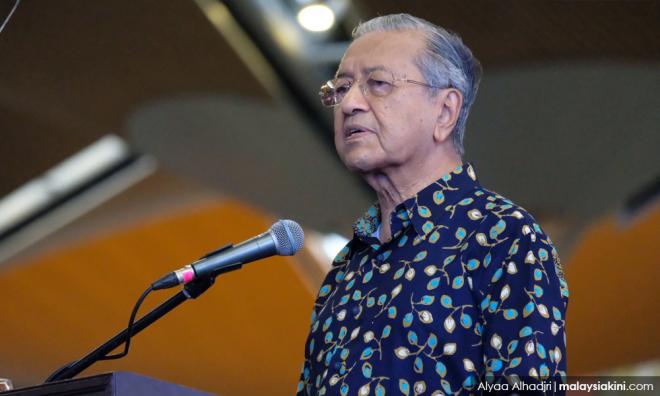 Yoursay: Dr M has no intention of handing over power to Anwar

YOURSAY | ‘If Mahathir is being backed by Umno, PAS and GPS, is this still a Harapan government?’

Hang Babeuf: There is no such thing as "just meeting." Meetings are always about something. There is always a purpose, an objective, an agenda. Even if it is just to explore whether a common agenda can be agreed upon and pursued.

So, please explain Prime Minister Dr Mahathir Mohamad, what was this meeting about?

It was not a "private" matter. It was, and is, the nation's business that you are dealing with here. The nation, the people who put you back in office again, have the right to know.

Mano: Mahathir, we made it very clear by our votes. We do not want Umno or any BN parties, neither do we want PAS.

We voted for Pakatan Harapan with lots of harapan (hope) in our hearts. We are seeing these hopes crumbling before us.

Abasir: This regime should now go for a name change. Continuing to call itself Harapan only serves as a daily reminder of the deception foisted on citizens.

Everywhere you turn, you see incompetence, crookedness, moral cowardice, depravity and treachery. Just when you think it can't get any worse, Harapan surprises you.

Mahathir's forced admission about secretly cavorting with ranking members of the kleptocratic regime (obviously without the knowledge or approval of the Harapan presidential council) is proof positive.

Reformasi is replaced by treachery, both within and between parties. This is so typical of Malay politics in which nothing is off the table and the end always justifies the means.

ChuenTick: Mahathir, your action speaks volumes on your oft-stated intention to step down in favour of PKR leader Anwar Ibrahim after a two-year transition period.

It is becoming increasingly clear you have no intention whatsoever to honour that agreement.

Be careful when you dance with the devils, Mahathir – don't be so sure you can determine the tune you are dancing to.

Gerard Lourdesamy: If Mahathir is being backed by Umno, PAS and GPS, is this still a Harapan government? This would be a betrayal of the mandate given by the people in GE14 despite all the odds and obstacles placed by BN.

What Umno/PAS fear is a resurgent Harapan under Anwar with his Islamic credentials and popular oratory skills. GPS does not want to lose the Sarawak state elections which must be held by 2021. So these political parties are motivated by self-interest.

PKR, DAP and Amanah should question Mahathir at the next Harapan presidential council meeting about this meeting. All of this political chicanery must stop. Mahathir and Bersatu should keep their word and promises.

The rakyat did not vote for Umno/PAS and GPS to be in the government directly or indirectly.

Will Umno/PAS and GPS support Harapan to amend the Constitution to void the previous delineation exercise undertaken by the Election Commission last year that heavily favoured Umno/BN and rural Malay majority seats?

The answer is obvious.

Anonymous_1550204262: The people are suffering. Enough of intrigue, Mahathir, please concentrate on reviving the economy.

Please stop your favourite pastime of grooming a successor because the two times that happened, you were immediately at work trying to remove them.

Brahman: Indeed, Mahathir is the one destabilising Malaysia. Anwar will not disappear, Mahathir should know this. Anwar was jailed twice and yet he came out stronger both times.

Mahathir now wants to renege on his promise and enlist the support of the parties whom people kicked out of power.

More people will detest him because of this, and it will galvanise even more those who already hate him.

Now that his protégé or Trojan horse has been outed as unacceptable, he's looking for other 'guns' to help him in his never-ending quest to deny Anwar the premiership.

Muruga: The opposition (Umno/PAS and GPS) were not the ones to decide and nominate Mahathir as PM-designate prior to GE14. It was Harapan and endorsed by voters in GE14.

Those wanting Mahathir to stay for a full term, and Mahathir having met them this week, is a betrayal of voters and Harapan by Mahathir.

NNFC: It is imperative that Mahathir and his men/women focus steadfastly on delivering an improved standard of living, more effective/efficient governance and a better economy.

It looks like some in the Harapan team are not focused at anything but trying to secure their power/position and are willing to throw their friends under the bus, as per the sex romps.

This shows their roots in Umno-style character assassination, and this will only work to the detriment of the party.

Anonymous_1cfb3ab6: I would urge Malaysians to refer to the recent Thailand elections. A newly formed party, Future Forward Party (FFP), won 20 percent of the popular vote and 80 out of 500 seats, and would have gotten more if the establishment hadn’t cheated.

This party was formed by young, technocratic, educated professionals who ran on a youthful and clean campaign on a true reform platform. The FFP is now the third force in Thai politics.

It’s time we Malaysians establish a third force to Umno/PAS and Harapan, and remove all these old dead woods that has been the cause of all our problems.

There will be 3.5 million new young voters, although it is unclear how many of these new voters want real change or are after crutches.

MW: Shouldn't it be "even if they put a gun on my head, I will still hand over" if Mahathir is sincere and wish to stop the speculation?

Quigonbond: Always a qualifier – "unless". Why does Mahathir do that? What kind of chess game is he continuing to play?

The promise to step down was not made to Anwar. It was made to Malaysians.