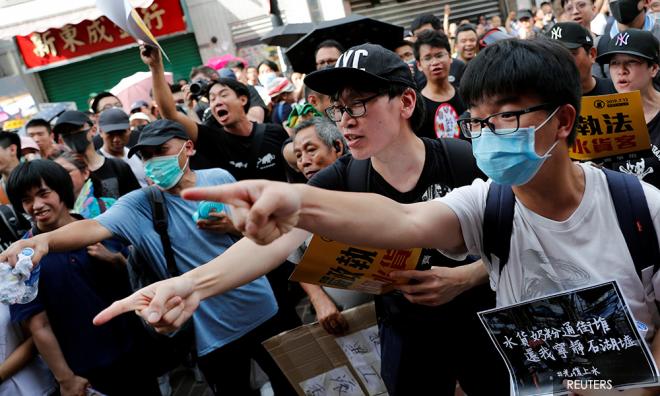 Hong Kong’s government said violence and illegal protests were pushing the city to an “extremely dangerous edge”, as police fired multiple rounds of tear gas to disperse hundreds of anti-government protesters on Sunday and Beijing said it would not let the situation persist.

The Chinese-controlled city, an Asian financial hub, has been rocked by months of protests that began against a proposed bill to allow people to be extradited to stand trial in mainland China and have developed into calls for greater democracy.

A general strike aimed at bringing the city to a halt is planned for Monday. Many flight departures were shown as being cancelled on Monday and a source and media reports said this was due to aviation workers planning to strike.

“We sprayed the traffic light because we don’t want traffic to work tomorrow and we don’t want citizens to go to work,” said one protester who was clad from head to toe in black.

Riot police confronted the protesters, who have adopted flash tactics, shifting quickly from place to place to evade capture and using online platforms such as Telegram to direct hundreds of people.

In a strongly worded statement late on Sunday the government said the events of the day showed once again that violence and illegal protests were spreading and pushing Hong Kong toward what it called “the extremely dangerous edge.”

Such acts had already gone far beyond the limits of peaceful and rational protests and would harm Hong Kong’s society and economic livelihood, it said.

After the peaceful demonstrations finished earlier on Sunday, protesters blocked roads in the town of Tseung Kwan O in the New Territories, set up barricades and hurled hard objects including bricks at a police station.

Police fired tear gas to disperse hundreds of protesters after a separate rally in the island’s Western district where thousands of people gathered to urge authorities to listen to public demands.

Protesters had begun a march towards China’s Liaison Office, which has been a flashpoint at previous protests.

Police said the protesters were “participating in an unauthorised assembly”, similar to Saturday when they fired multiple tear gas rounds in confrontations with black-clad activists in the Kowloon area.

The protests have become the most serious political crisis in Hong Kong since it returned to Chinese rule 22 years ago after being governed by Britain since 1842. They have also presented the biggest popular challenge to Chinese leader Xi Jinping in his seven years in power.

China’s official news agency Xinhua said on Sunday: “The central government will not sit idly by and let this situation continue. We firmly believe that Hong Kong will be able to overcome the difficulties and challenges ahead.”

During the night, protesters split into several different directions to disrupt transport networks. Police said they were “seriously paralysing traffic and affecting emergency services” and warned them to stop immediately.

The leaderless nature of the protests has seen participants adopt a strategy called “be water”, inspired by a maxim of the city’s home-grown martial arts legend, Bruce Lee, that encourages them to be flexible or formless.

Police said more than 20 people had been arrested since Saturday for offences including unlawful assembly and assault.

During Sunday protesters marched and brandished coloured leaflets, calling for a mass strike across Hong Kong on Monday and shouting “Restore Hong Kong” and “Revolution of our time”.

“We’re trying to tell the government to (withdraw) the extradition bill and to police to stop the investigations and the violence,” said Gabriel Lee, a 21-year-old technology student.

Lee said he was particularly angered that the government was not responding to protesters’ demands or examining the police violence.

What started as a response to the now suspended extradition bill has grown into demands for greater democracy and the resignation of leader Carrie Lam.

“Even if Carrie Lam resigns, its still not resolved. It’s all about the Communist Party, the Chinese government,” said Angie, a 24-year-old working for a non-government organisation.

On Saturday, protesters set fires in the streets, outside a police station and in rubbish bins.

Thousands of civil servants joined in the protests on Friday for the first time since they started, defying a warning from authorities to remain politically neutral.

The protests have adapted rapidly since the start of June with the movement spreading from the Admiralty area, where the legislative council is located, across to the whole city for the first time.

Previous protests have also targeted mainland visitors to try to make them understand the situation in Hong Kong, which is officially termed a Special Administrative Region of China.

Young people have mostly been at the forefront of the protests, angry about broader problems including sky-high living costs and what they see as an unfair housing policy skewed towards the rich.

Hong Kong has been allowed to retain extensive freedoms, such as an independent judiciary but many residents see the extradition bill as the latest step in a relentless march toward mainland control.

Months of demonstrations are taking a growing toll on the city’s economy, as local shoppers and tourists avoid parts of its famed shopping districts.

HK protesters seek to shut down city with general strike

Refinitiv removes Reuters story on HK protests from screens in China
3 Aug 2019
US lawmakers call for halt to sales of crowd-control gear to Hong Kong
2 Aug 2019
Thousands of Hong Kong civil servants to rally, wave of protests planned
2 Aug 2019
Police arrest eight as HK gears up for another weekend of protests
2 Aug 2019