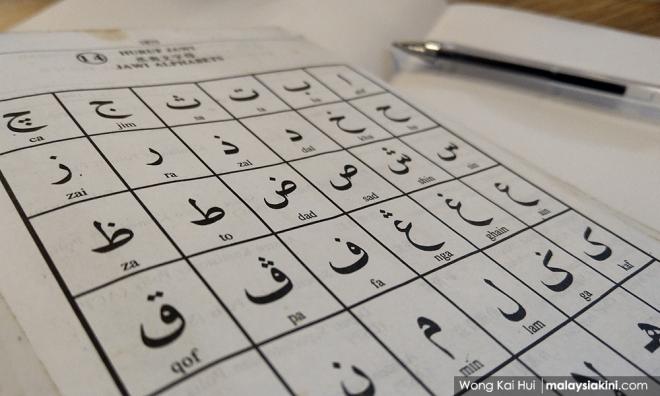 ADUN SPEAKS | De facto Islamic Affairs Minister Mujahid Yusof Rawa is right in saying that learning khat or Jawi calligraphy will connect the past with the present.

For some sections of Malaysian society, particularly the Malays, the return to Jawi links them to how the Malay language was written in the past, long before the Romanised version appeared on the scene.

It was this Jawi script, derived from Arabic, that showed Malays had a powerful bond with Islam.

I can perfectly understand the emotive sentiments expressed by Mujahid.

But then, Malaysia is not a homogeneous society, it is multiracial and multireligious; Malays, Chinese, Indians and others might not have a common history or historical connect.

This poses a huge problem in the way we conceptualise the nation, although some common denominators have allowed for unity and understanding in the post-independence period.

National integration or national unity defies solution in a divided society like Malaysia. Hopefully the new government can find a way out of the present impasse.

Whatever attempts there have been at national integration seem to be negated by hegemonic solutions that tend to prioritise one segment over others.

I don’t understand why the introduction of khat calligraphy has assumed such importance, but is controversial to the point of affecting the Pakatan Harapan coalition.

As I said before, khat might be important to the Malays but such a reception might not be present among non-Malays, although over the years, many non-Malays have acquired competence in Jawi.

It is the mandatory imposition that seems to be the source of the problem. Such an imposition brings out the worst imagined fears in the non-Malay communities.

Why not allow khat to be pursued voluntarily as an extracurricular activity in schools, rather than mandatory imposition?

It is not so much the fear of khat per se, but rather, what might follow if such a policy takes root in the educational institutions.

The government should be careful in willing to impose the khat calligraphy in the Bahasa Melayu syllabus in primary schools, even at the expense of opposition from non-Malays.

What is the urgent necessity for this?

Is there pressure from the Malay right-wing forces?

As I have said earlier, it is not khat per se, but the political, social and cultural context in which this policy is imposed.

Malaysia’s polarised atmosphere does not help when it comes to khat.

There is a feeling amongst non-Malays that such an imposition might be just to test the waters before other more extreme cultural or religious elements are introduced in the school curriculum.

The Education Minister Maszlee Malik can convince the world that khat has nothing to do with the imposition of Islamic values, but he must be honest and responsible.

It is not the mere act but the reasoning that foreshadowed the proposal. Who are those behind this idea? What are their motives?

If Maszlee could be irresponsible enough to suggest that teachers from Kelantan use Sabah and Sarawak as “medan dakwah”, then his argument that khat has nothing to with Islamisation might not be convincing.

Maybe the non-Malays are overreacting, but can you blame them for sensing that something is seriously amiss with the education system?

A good and responsible government would not go ahead with the khat proposal, given the opposition.

But at least temporarily suspend the measure until further and more in-depth consultations are held with the stakeholders.

Khat does not look good for Pakatan Harapan.

race & religion
arts & culture
khat
jawi
education
Related Reports
After khat and other controversies, Harapan told to vet policies before rollout
a year ago
Guan Eng says Chinese daily raised fear over khat
a year ago
Khat is for heritage and national identity - NUTP
a year ago
DAP should put pressure on PM to abort khat, says MCA
a year ago