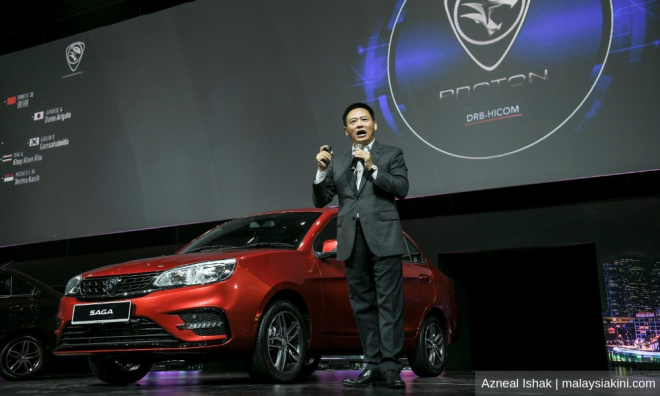 Proton back on the grid with 2019 Saga

Proton has launched the 2019 Saga at an event held at the Malaysia
International Trade and Exhibition Centre (MITEC) on Tuesday night.

The event was officiated by Minister of International Trade and Industry Darell Leiking.

Priced at RM32,800 (Standard MT), RM35,800 (Standard AT) and RM39,800 (Premium AT), the updated version of Proton's iconic and best-selling model has received styling revisions, a brand new four-speed automatic gearbox and a number of smart features.

Proton is selling its latest model based on the slogans supreme style, smart savings and superb stability.

The story of the Proton Saga is synonymous with that of Proton itself and it stretches back 34 years and three full model changes. At its launch in 1985, it was the first Malaysian car.

The 2019 Saga has been given styling updates that pay homage to its roots but also brings it in line with the rest of the Proton range.

The grille also features the infinite weave pattern that was introduced on the Proton X70 and can also be found on the 2019 Iriz and Persona.

It has Bluetooth connectivity, 16GB of internal storage and smartphone connectivity for Android phones. Other changes include new seat upholstery, a new centre panel, new meter combination display with Eco Drive Assist and up to three USB ports.

Convenience features new to the 2019 Saga include a remote trunk release, a sun visor with a ticket holder and mirror, LED map lamps and new assist grips to match the new headlining material.

Mechanically, the biggest change is the fitment of a new four-speed automatic in place of the CVT previously used.