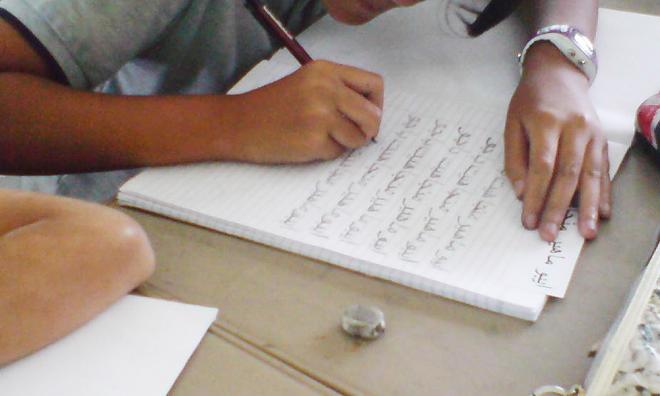 Tracing, copying the Jawi characters and adding the dots to produce khat calligraphy is all that is required of Year Four pupils in national-type Chinese and national-type Tamil primary schools, or SJKC and SJKT, when the khat art form is introduced as part of the Bahasa Melayu subject next year.

Universiti Putra Malaysia (UPM)’s Department of Malay Language lecturer in Language Learning and Acquisition, Prof S Vijayaletchumy said the subject would only be taught four times a year for 10 minutes as support material for the Bahasa Melayu syllabus.

Vijayaletchumy, who is among panel members involved in drafting the curriculum, also emphasised that in the classroom sessions, only five to six Jawi characters would be introduced to the students.

“The society, as well as certain parties, have in fact misunderstood or are confused by the difference between Jawi and khat. They are two different things.

“Jawi is a form of writing used for official purposes, while khat or calligraphy is a decorative art form using flowing cursive lettering.

“The Education Ministry (MOE) is incorporating khat writing in the Bahasa Melayu syllabus because it is part of the Malay heritage and has its aesthetic value.

“What is going to be taught is khat writing and not Jawi and this has caused much confusion,” she told Bernama when met at UPM, today.

As such, she said, parents of SJKC and SJKT pupils need not fear as this has nothing to do with Islamic learning because khat is an art and very much like Chinese calligraphy.

She was commenting on the issue over khat writing, which will be introduced in the Bahasa Melayu syllabus for Year 4 pupils in vernacular schools, which has raised objections among certain groups, including 12 Chinese and Tamil education organisations in the country.

Vijayaletchumy said there are five key areas in the Bahasa Melayu teaching and learning process. namely, listening/speaking, reading, writing, as well as grammar and vocabulary skills.

“The khat lessons incorporate aesthetics in writing and will not be included as a criteria in assessing students’ achievement. This has been stated clearly in the Standard Document for Curriculum and Assessment (DSKP).

“The lessons will be conducted in a relaxed manner and it is just an additional activity. This is also a psychomotor assessment as khat writing requires pupils to extend the writings to the left, right, bottom and so forth.

“It is also good for the mind because for the students this is a fun learning session as they are not pressured to pass the test, thus making learning more conducive.

At the same time she said, the introduction of khat art lessons would not require additional teachers in the school as the existing staff would be deployed for the task.

On top of that she said parents do not have to worry over costs, as all tools to be used in the learning process would be borne by the ministry.

“I hope this issue will cease from being politicised as it is for the benefit of the future generation”, said Vijayaletchumy, adding that the matter had been discussed and agreed upon by over 30 linguists, together with SJKT and SJKC school teachers who sat in the special panel.